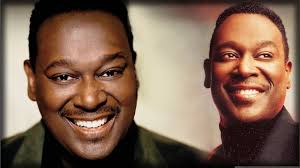 Luther Vandross represents the voice of a black man pouring his heart and soul into the music and arts he presents to society by being himself unapologetically. Never comparing himself to others took the music industry by standing his own ground and creating his own image and staple sounds.

Luther Ronzoni Vandross was born April 20, 1951, New York, New York, U.S and died on July 1, 2005, Edison, New Jersey), American soul and pop singer, songwriter, and producer whose widespread popularity and reputation as a consummate stylist began in the early 1980s. While growing up in a public housing project on Manhattan’s Lower East Side, Vandross was encouraged to pursue music by his widowed mother. He began his professional career singing commercial jingles and background vocals and worked as a vocal arranger and songwriter, contributing “Everybody Rejoice” to the Broadway musical The Wiz in 1972. As a featured vocalist on the album The Glow of Love (1980) by the disco group Change, Vandross came to the attention of record executives and signed with Epic, which allowed him to write and produce his material.

The difference informs the distinction between him and most other men of R&B. Luther sang from a softer space, topically, and tonally. He usually sang from a gentle, comfortable place. Not urgent. Not aggressive. Never suggestive. His first most excellent hits compilation was titled The Best of Luther, The Best of Love, because his entire catalog was love. Romantic and devoted love, not sex or lust. Adoration. And while his voice is appreciated–he’s featured on every most excellent vocalist list of note–the full range and depth of Luther’s vocal craftsmanship are not. He was a writer, producer, and one of the greatest vocal manipulators in the game, as well-known and sought-after from early in his career for his vocal arrangements as his singing. The New York Times once described Luther as having an “obsession with the human voice, bordering on clinical.” Some people’s gifts are leagues beyond the old talent-plus-preparation-equals-opportunity equation. Luther was a direct reflection of that. He is said to be divinely appointed.

For almost 25 years, from 1981 to 2005, Luther dominated the American R&B music charts like no other artist before or since. In that span, Luther released eight #1 R&B albums, seven #1 R&B singles, and another five Top 20 R&B singles. He achieved crossover status with eight Billboard Top 10 albums, including reaching #1 with 2003’s Dance With My Father; and another five Top 10 Billboard Hot 100 singles. From 1981 to 1996, Luther Vandross released 11 consecutive platinum/double platinum albums on CBS/Sony’s Epic Records label. At the time of his passing in 2005, 13 of Luther’s 14 studio albums had gone platinum or multi-platinum. Luther’s success was not confined to the United States, with record sales of over 40 million worldwide since 1981, including four Top 10 UK albums (one #1). In March 1989, Luther Vandross was the first male artist to sell out ten consecutive live shows at London’s Wembley Arena. Overall, Luther received 31 Grammy Award nominations, winning eight times. Additionally, Luther won eight American Music Awards, including Favorite Soul/R&B Male Artist seven times.

Who inspired them musically?

Luther Vandross made himself stand out because he did not model himself after any other male singer. He modeled himself after phenomenal women who were already changing the game. Vibe magazine says, there’s not a male predecessor he compares to because he didn’t pattern himself after the soul men like Sam Cooke, Marvin Gaye, or Teddy Pendergrass. He studied the divas. Aretha Franklin, Diana Ross, and Patti Labelle were the voices that fascinated and inspired a young Luther. Seeing Dionne Warwick live at the Brooklyn Fox Theater made him realize he wanted to sing. “She came on stage and just killed me; the music was more serious; the song value was more serious. ‘Anyone Who Has a Heart’ was a masterpiece,” he told The Washington Post. “I decided at that point that I wanted to do something in music.”

Who do they inspire musically?

Luther Vandross inspired many musicians, including those that can before and after him. Since his passing, artists have chosen to honor him by performing his songs on national platforms or sharing their sentiments about him. Below are quotes from an MTV article with the artist sharing how they felt.

When Aretha Franklin and Alicia Keys performed at the Essence Music Festival, they spoke of him. “I can’t believe it, I’m so sad,” Keys said backstage. “There’s something in the back of your mind that wishes someone was playing a big prank on you. That’s how I felt when I found out. I couldn’t even believe it. I’m happy to say I can call him, my friend. I think he’s such a wonderful man that’s left behind such a beautiful legacy. That’s something that will truly inspire generations to come. We will absolutely miss him. We pray for his family that they heal, and … My goodness, this is so sad.”. Patti Labelle once said that “He was one of the greatest voices that ever sang a song ” and  “He was one of the sweetest men I have ever known. And he was one of the best friends I have ever had. I’m so happy that his legacy will live on forever. … Luther was one of a kind and will never be forgotten. I miss him more than words could ever say.”

The Legacy Luther Vandross is timeless. His authenticity and commitment to being genuine and pure have continuously attracted people to his music. Artists today, still get inspiration from the Great Luther Vandross because they know his style and technique was unmatched and can not be duplicated.