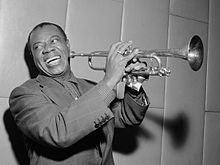 Louis Armstrong was a trumpeter, bandleader, singer, soloist, film star and comedian. Considered one of the most influential artists in jazz history, he is known for songs like “Star Dust,” “La Vie En Rose” and “What a Wonderful World.” Louis Armstrong was born on August 4, 1901, in New Orleans, Louisiana. From 1925 to 1928, Armstrong made more than 60 records with the Hot Five and, later, the Hot Seven. Today, these are generally regarded as the most important and influential recordings in jazz history. He also began singing on these recordings, popularizing wordless “scat singing” with his hugely popular vocal on 1926’s “Heebie Jeebies.” He passed away in 1969. His home is now a national historic landmark and museum. [embedyt] https://www.youtube.com/watch?v=CWzrABouyeE[/embedyt]