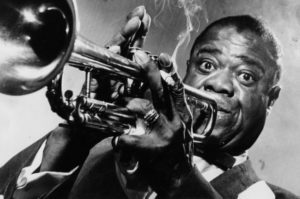 Beginning the year of 1919, Louie Armstrong spent his summers playing on riverboats with a band led by Fate Marable. He was an American jazz pianist and bandleader. There is there Louis honed his music reading skills, eventually having his first encounter with other jazz legends such as Mix Beiderbecke and Jack Teagarden.

In 1922, King Oliver sent for Armstrong to join his band in Chicago. Armstrong and Oliver became the talk of the town with their intricate two-cornet breaks and started making records together in 1923.

After a year in New York with Fletcher Henderson and His Orchestra Armstrong was proved unsatisfied, pushing him to return back to Chicago in 1925. From there, he began making records under his own name for the first time.

The records by Louis Armstrong and His Five, who were later known as the Hot Seven, are considered to be the most influential in jazz. Armstrong’s improvised solos transformed jazz from an ensemble-based music into a soloist’s art, while his expressive vocals incorporated innovative bursts of scat singing and an underlying swing feel.

By the end of the decade, the popularity of the Hot Fives and Sevens was enough to send Armstrong back to New York, where he appeared in the popular Broadway revue, “Hot Chocolates.” He soon began touring and never really stopped until his death in 1971.

In America, Armstrong had been a great Civil Rights pioneer for his race, breaking down numerous barriers as a young man. In the 1950s, he was sometimes criticized for his onstage persona and called an “Uncle Tom” but he silenced critics by speaking out against the government’s handling of the “Little Rock Nine” high school integration crisis in 1957.

Armstrong continued touring the world and making records with songs like “Blueberry Hill” (1949), “Mack the Knife” (1955) and “Hello, Dolly! (1964),” the latter knocking the Beatles off the top of the pop charts at the height of Beatlemania.

All in all, Louis Armstrong changed the way jazz musicians improvised by performing with a rhythmic energy that was quickly imitated. Whether Another impact Armstrong had on jazz came from his use of nonsense, or “scat” syllables in his singing.