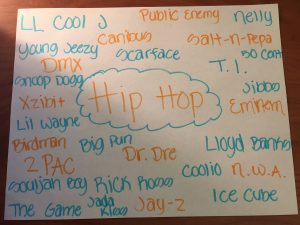 From rapping to break dancing, Hip-Hop is one of the most unique genres to ever grace the death. Originating in the 1960s in New York, African-American communities began to form the sounds of Hip-Hop and quickly embraced our new creation. The genre gained fame throughout the world when the Sugarhill Game debuted their album, Rapper’s Paradise. But, many changes began to come about after the historical release. The message of Hip-Hop began to focus on the experiences of violence, racism, and the poor conditions of many Black neighborhoods in the United States.

The sounds of Hip-Hop have become more advanced as technology continues to advance. Artists now have access to a variety of beats and instrumentals and can incorporate previous bodies of work into their songs. Today, the message of Hip-Hop may not be as educational as it was in the past, but artists such as Kendrick Lamar have tackled the social justice issues that African-Americans face today in our country and around the world. The genre is still one of the most appreciated creations of our community and its artists, from Snoop Dogg to Young Jeezy,  continue to gain popularity as the years pass.