The musical type ragtime existed long before it was widely known as the written form of ragtime. It did not emerge widely into the public eye until the 1890s. The term “ragtime” is partially derived from the verb phrase ” to rag” which explains the performance element of the genre. “To rag” means to syncopate a tune, according to many contemporary sources. Similarly enough the rhythmic effects of syncopation is one of the main characteristics of ragtime. It was created by African American musicians as an un-notated music and was centered in Missouri although it eventually spread across the country. Ragtime the playing style was performed in bars, saloons and other venues blacks could perform at post Civil War.

Ragtime includes precursor musical styles of “coon songs” and cakewalks which gave early ragtime a negative connotation. A cake walk was a dance competition that depicted white behavior performed by African American slaves and the best performer or couple received a cake as a prize. Coon song was a song style that presented stereotypical views of African Americans by white performers in black face. The most prominent element is syncopation which is the displacement of regular metrical accent in music and is usually caused by stressing the weak beat. As for ragtime’s pattern it typically follows an AABBCCAA pattern. 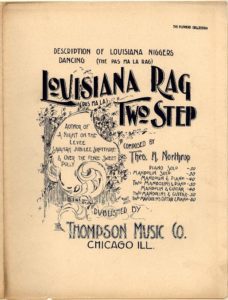 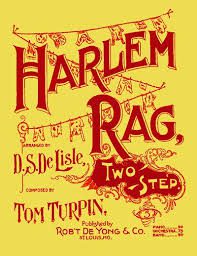 Ragtime began to emerge from the black culture from an orally transmitted music to written and printed sheet music. One of the first musicians to publish a composition of ragtime was Ben Harney. He published “You’ve Been a Good Old Wagon but You’ve Done Broke Down” in 1895. The song introduces the rhythmic feature “stop time” that is later used by notable performer Scott Joplin. Other important compositions published shortly after were Theordore Northrup’s “Louisiana Rag Two Step”, the first piano rag and Tom Turpin’s “Harlem Rag”.

Scott Joplin: Considered one of the greatest ragtime composers. He played a vital role in the history of ragtime and was dubbed King of Ragtime. He wrote over 40 pieces, a ragtime ballad and 2 operas. He began publishing music in 1895 and one of his first pieces, “Maple Leaf Rag”, became ragtime’s first and most influential hit in 1897. He even taught future ragtime composers Brun Campbell and Arthur Marshall.

Tom Turpin: His rag “Harlem Rag” was one of the first rags composed before ragtime’s grand introduction to world. Other well known rags of his are “St. Louis Rag”, “Ragtime Nightmare” and “Bowery Buck”. His influence on local music in St. Louis earned him the title “Father of St. Louis Ragtime”.

Eubie Blake: He was a composer, lyricist and a pianist of ragtime. His most famous piece of ragtime is “Charleston Rag”. Outside of ragtime he also created compositions in the genre jazz.

Ragtime set the foundation for many genres like blues, R&B and jazz. Jazz in particular was probably the most influenced by ragtime. Jazz is considered a slower simpler version of ragtime which is why ragtime is considered by many to be the creator of jazz.