Classical music is considered one of the most calming and elegant forms of music. Classical music within the black community arose in the twentieth century. During this time, prominent members of the classical music community that came from conservatories began to teach at historically Black colleges and universities.

Prior to Emancipation was the antebellum period. During this time, Philadelphia was the so called cultural capital for Black America. Here is where black musicians were able to successfully compare and compete with white musicians of the time. However, they were still seen as part of the servant class. Some of the most influential black composers during black classical rising time include Francis “Frank” Johnson.

Francis Johnson was essentially a musical genius when it came to the keyed bugle horn. He was also a music teacher and a band director. He stepped into the public gaze as an accomplished composer when his  work “A Set of New Cotillions” was published in 1818. From that point on, between 1820 and 1844 he toured the United States and England. He performed at both black and white events. He was the first American to tour Europe to perform group concerts. Over his entire career, Johnson published over 200 compositions that included ballads, marches and piano arrangements. 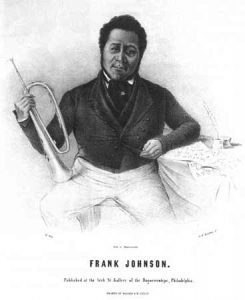