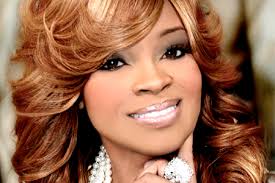 To find information about Karen Clark Sheard I mainly scoured internet sources. There is a great amount of information about her career involvng her in the group “The Clark Sisters” and also a plethora of sources highlighting her solo career. The genre being gospel many people take a spiritual standpoint on her music and her as a person. Through my research, I have grown to have an appreciation for Karen Clark-Sheards music and her ability to carry strong messages in her songs.

Although starting of in a gospel group with her sisters, Karen Clark Sheard has been a very influential gospel artist. She has very unique sound and became very successful during her solo career.

Born in Detroit, Michigan, Karen Clark-Sheard got her humble begins from her mother, a gospel musician, and choral director, Mattie Moss Clark . Since a young age Clark-Sheard was groomed to sing along with her sisters. Being the youngest of all the Clark Sisters she was brought up around many soul singing females who shaped her to who she is today. The Clark Sisters began performing together in the 1960s and in 1973 they recorded their first album together. Karen being the youngest of 5 grew up in the gospel world and this showed in her vocal octave range. From being in this group with her sisters they are credited with aiding the mainstream of gospel music and incorporating different genres of music like R & B. When they performed at the Grammy awards in 1983, it was looked down upon by church folks. But none the less they were a phenomenal gospel group.

The debut of Clark-Sheard solo career began with the release of her solo album Finally Karen in 1998 and it was even nominated for a Grammy award and won the best Gospel Album award that year. She was inspired to go solo by singing “Don’t Give Up” on the Island Inspirational All-Stars. From ther she went on to performing

-Video of her performing

-Awards and Types of Recognition

-Why is she so important?

_What Has she accomplished?