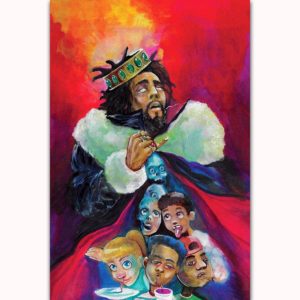 On Monday, October 8, 2018 I saw J. Cole in concert at Capital One Arena in Washington, D.C. he performed 24 of his songs, some were from his newest album K.O.D. and some songs were from older albums like Cole World: The Sideline Story and Born Sinner. J.Cole performed all of his songs solo along with drums, guitars, and pianos. As his opening act he had Jaden Smith come perform some of his songs like Icon. J. Cole performed extremely well. His music speaks for itself and is not like a lot of mainstream music today talking about getting girls and doing drugs. Most of his songs are stories about this that he has gone through in his life. His song Neighbors is about his neighbors thinking he was selling drugs in his house because he was a black man living in a big house and drove nice cars. His song Deja Vu is about seeing a girl in a club and wanting to meet her and get her number and Wet Dreamz is about him losing his virginity. Between some of his songs he would speak to the audience about topics that his songs were about. His song Brackets is about paying taxes and not knowing where your money goes, so before he performed it he talked about how he wished he could choose where his tax dollars go and why so much of our money gets taken away by taxes. His performance of Brackets was my favorite because I never truly listened to the song and really heard what he was saying until his concert and it really opened my eyes. I also loved how he spoke before the song. J. Cole is a hip hop artist who creates music about serious topics that are relevant in today’s society. During his performance, he did not dance or have any back- up dancers. Whenever he started rapping and getting into his flow he would cross his arms and rock back and forth. He stood at his mic, for some songs and for others he sat on a stool and he sang and rapped his songs. J.Cole is one of the few hip- hop artists who discuss real issues in his music.