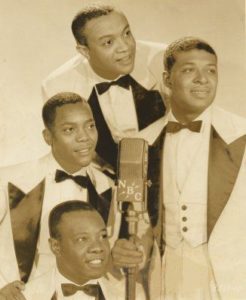 As time progressed on from the late 19th century to the early 20th century, music progressed along with it. The negro spiritual was still the pinnacle of black music, but was being expressed in a different avenue.  Spirituals were now rearranged and displayed by groups of singers for performance purposes. Jubilee Quartets were popular African-American religious musical groups that thrived throughout the first half of 20th century. The term “jubilee quartet”derives from Fisk Jubilee Singers, comprised of singers Alfred G. King(Bass 1), James A. Myers(Tenor 2), Noah W. Ryder(Bass 2), John W. Work II(Tenor 1).

Jubilee quartets were usually comprised of 4-6 male (sometimes female) voices, in voice parts ranging from first Tenor to second Bass. In these quartets, singers used close harmonies in formal arrangements in their performances of the spirituals. This was strikingly different than the way that spirituals were performed prior to the creation of these quartets. Instead of the soulful, rich crooning that was known to be produced from singing these spirituals, jubilee quartets sang the songs in a concise and emotion-stripped fashion.

When Fisk University, a Historically Black College located in Nashville Tennessee, needed money, it looked to the Fisk Jubilee Singers to go out and sing as as ambassadors of the school in the hopes of attaining patronage from their listeners. Over time many started to use singing groups as a way to provide funding for Historically Black Colleges and Universities from White and wealthy Black patrons.

Two major performers that held a ginormous impact in the performance of quartet music are:

The commodification of quartet music eventually led to radio broadcasting, touring, and a huge crossover phenomena into the world of White listeners.

Jubilee Quartets can be accredited to the creation of gospel standards that are used today.

In short, Jubilee quartets have a culture that is an important piece of this music that has been grossly overlooked due to the commodification of negro spirituals and sacred music as performance pieces.