Jubilee Quartets started in the mid-1800’s as an outgrowth of the African American university singing movement. 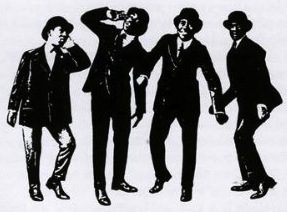 The early a cappella vocal groups were originally known as Jubilee Quartets because of the nature of the repertoire and characteristics of the performance.

In the context of African American music, a quartet was defined as a vocal ensemble that consisted of minimum four voices and a max of six voices singing four-part harmony arrangements in either an a cappella style or with limited instrumentation