Jubilee Quartets originated in the mid-1800s within the African American university singing movement.  They were the earliest forms of African American a cappella groups and were given the name because of the characteristics of their performance style. These groups were often made up of a minimum of four vocalists and a maximum of six. An African American quartet is not defined by the size of the group but rather the number of designated harmony parts. Quartets were different than Spirituals in that they were often given informal arrangements to perform publicly. They provided a joyful and upbeat change from the melancholy melodies of negro spirituals. 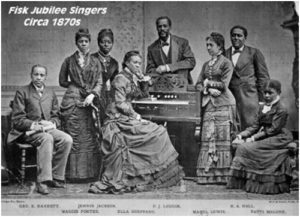 Quartets sang in barber shops and competed in the streets to show off their Talent. Singing with universities became popular after the Civil War when HBCUs became popular as a part of Reconstruction. By going on tours many of these University singing groups were able to provide more funding for their HBCUs from wealthy white donors.

Important Performers include the Fisk Jubilee Quartet and the Golden Gate Quartet. Commodification of quartets grew into their music being played on radio stations and going on national tours, broadening their audience to more white listeners. Many jubilee quartet influences can be seen in the gospel music we listen to today.