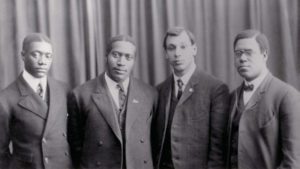 There are multiple different types and styles of quartets. The first type to emerge was the University Jubilee Quartet. Many of these quartets were in southern schools such as Atlanta University, Southern University, and Fisk University who were all founded by the American Missionary Association to educate the “newly emancipated slaves” (African American Music). One of the most renowned University Quartets is the Fisk Jubilee Choir who was responsible for saving their school from financial trouble due to touring starting in 1871. The choir began singing “varied repertoire and later began to only sing spirituals”.(African American Music)  The spirituals sung were comprised of multiple different elements “ harmonized western-influenced ensemble singing, African American barbershop quartet singing style, and call and response forms of folk spirituals.” (African American Music) The use of strophic songs was used during this time where songs had the same melody but different words for each stanza. The next emergence was Minstrel Jubilee Quartets. When it was popular to have all black minstrel companies, they focused on the religious aspect of black life allowing for “the Fisk Jubilee Choir to provide material for them.” This grew into every minstrel troupe to have “and African American jubilee group”. (African American Music). This allowed for them to be prime entertainment and they even began singing popular songs. Next came Community – Based Jubilee Quartets which were strongly influenced by the previous two styles. Some singers in this style were trained professionally, while others merely “imitated groups they’d heard on the radio.” (African American Music) They were known to sing in churches, community events and roadshows where they made money. Significant elements of this style are that early on they were acapella, no emphasis on solo’s, and there are distinctly four singers. The four singers were known as first tenor, second tenor, baritone, and bass. During this time the element of rhythm was introduced through the voice of the bass distinctly. This style is also characterized by “overlapping call and response ” which allowed for the soloist to begin a “phrase” and the background singers continue the phrase. Other types of quartets include Sharp Note Quartets and the one that I’m most familiar with Barbershop Quartets. Sharp-Note groups weren’t very popular however they heavily influenced other types of quartet styles with their significant “fa-sol-la sequence”. (African American Music) Barbershop tradition started in the 1880’s harmonizing spirituals, folk songs, songs of the day. They gave a blueprint for white artists as they looked to their harmonies for guidance. Famous barbershop groups included the Mills Brothers and the Golden Gate Jubilee Quartet. 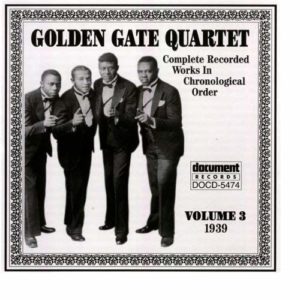 During the Transitional Period there was a birth of “gospel” because the four part harmonies transferred well into gospel songs. There was also the emergence of five voices allowing for “two lead singers to perform switch-leads”. (African American) Also just like in the movies there were “song-battles” where quartet groups would compete, sometimes for money, and body percussion was often used. (African American Music) And next came the gospel period where groups began to have a gospel repertoire and the “secular music was replaced by spirituals and hymns”. (African American Music)

The commodification’ of quartets came and started with the use of radio. Recordings began in 1891 when Columbia recorded the Standard Negro Quartette of Chicago and Victor Record Company began recording many university quartets professionally. In the 1930’s broadcasting stations began doing “race series which only featured African American performers”. (African American Music) Later community-based quartets, Utica Institute Jubilee Quartet being the first, began to get major radio play allowing them to be available to a much wider audience. And during war times many of the members would become broadcasters. Later they gained popularity doing tours with other quartet groups. This allowed for African Americans to not only gain fame in their local communities but nationally through the use of radio and touring.

In studying jubilee quartets they have truly laid a blueprint for African American Music. Many of the artists that we know and love were influenced by the church and gospel music which shares roots with jubilee quartets, from the content to the style and harmonies. These groups deviated from the traditional monolithic  singing of spirituals and created a genre of their own with immaculate tight harmonies and most importantly rhythm. When I look at all the groups that I love like the Temptations, the O’Jays, and the Delfonics they have clear remnants of the Jubilee Quartet style of music. They even had clear effect on my favorite group Boyz 2 Men who had the style down to a tee, from the bass who did narration, the four part harmony and the occasional flawless acapella rendition. Overall this genre of music has paved the way for many more styles to come and even allowed the first African American group to be on radio.