Jubilee Quartets, a name obtained from the Fisk Jubilee Singers, emerged in the mid-1800s out of the African American university a cappella singing movement.  These groups created a unique style of music using a four-part harmony with a combination of African American practices and European elements. The Jubilee Quartet genre is derived from Negro Spirituals; when this genre originated, sacred texts were sung, but at a faster tempo.

Quartets in the African American community are not determined by the number of singers in the group, but instead the number of harmony parts.  Quartets consists of four to six members with the following harmony parts: bass (sings the lowest notes), baritone (narrator/lead singer), second tenor, and first tenor (sings the highest notes).  Jubilee Quartets are also known for their high rhythmic songs.

This genre went through three different significant periods.  The first was the jubilee period (1880-1929), which included community-based groups, sharp-note/sacred harp groups (borrowed from European church songs and not very common in the black community), barbershop community groups, and minstrel quartets, where white people would perform in blackface.  The second was the transitional period (1930-1945). The last was the gospel period (1946-1969), during which spirit induced extended solo passages and impromptu personal testimonies became common.

As people began to notice this genre’s enormous audience, politicians began to ask these musicians to help spread their campaign messages to the African American community.  For example, the Golden Gate Quartet has a song entitled “Stalin Wasn’t Stallin,’” which was written and performed as propaganda during World War II. Also, Black musicians were given opportunities — during music videos, for example — that they would not have otherwise gotten. 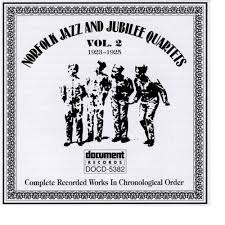 Beginning around the 1920s, the radio became a common for news and entertainment.  Thus, live radio broadcasting of jubilee quartet singing became popular. Some radio stations dedicated a few hours a day to “Black programming,” during which this genre was performed often.  Also on the radio, these groups would sing ads for different products and companies. Jubilee quartets also began touring on what was called a “touring circuit.”

In music created by jubilee quartets, beats and rhythm were added to sacred texts, similar to those found in Negro Spirituals, and created what is considered today to be gospel music.  This genre also influenced the rhythm and blues genre.

Similar to Negro Spirituals (and all African American music), the music of the time period was an outlet for musicians to talk about what they were experiencing in their personal lives, as well as commonalities within the Black community.  The freedom they received after slavery was abolished can be seen in the jubilee quartet genre through the upbeat tempo and rhythm that was introduced during this time. I would consider this genre of music as the beginning of modern music as I know it today.