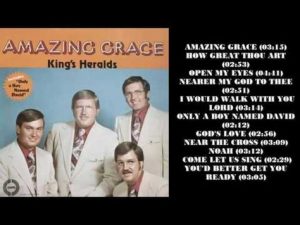 African American sacred tradition is a strong pillar in the evolution of African influence on music in the US and at the root of several genres. Folk spirituals in the 1800s evolved into arranged spirituals of the 1870s which, after the emergence of Folk gospel and gospel hymn from the 1890s to 1900, eventually led to the genre of Folk Jubilee Quartets in the early 20th century. The Jubilee Quartet genre is recognizable by the ensemble of four to six voices performing formal arrangements of spirituals in close four-part harmony. Additionally, Jubilee quartet preserves the traditional folk component of repeated single melodies with varying sets of lyrics (strophic).

There began a university singing movement of jubilee quartet style after the American civil war during which Fisk Universities’ Jubilee Quartet which primarily sang operatic selections began singing Negro Spirituals and touring the world to raise funds for Fisk University as it was on the verge of bankruptcy. John Wesley Work II, a conductor and arranger at Fisk, is quoted saying that because of the tours of The Fisk Jubilee Singers “the world never considered [the genre] more than a commodity through which Negro schools maintained themselves”; which speaks to the social implications of the university singing movement. The genre became more commonly recognized by the performability of the music and less about the meaning of the songs and the skillful arrangements. The commodification of the genre is pinpointed, in this respect, to those who monetarily consumed the genre which was predominantly non-Black audiences able to provide funding.

Along with The Fisk Jubilee Singers, the Golden Gate Quartet, and the original Five Blind Boys of Alabama a.k.a Happyland Jubilee Singers before their music style transitioned from Jubilee to what some refer to as improvisational gospel. Like in the journey of the Five Blind Boys of Alabama, Jubilee quartets directly influenced Gospel quartet and traditional gospel songs in the 1980s.

More in-depth research of this genre has forever changed my opinion of non-Black choirs performing cultural songs without cultural understanding. Often times in my experience, when predominantly non-Black choirs sing spirituals, the songs are placed under the blanket term of “choral” and performed with smiles even when the song calls for more of a solemn tone which completely changes the tone and meaning. Culture is such an important piece of this music that has been grossly overlooked due to the commodification of negro spirituals and sacred music as performance pieces