The Jubilee genre derives from the many characteristics of Negro Spirituals incorporated with various blues sounds and marked a shift in musical history. Some characteristics of the genre include close harmonies, formal arrangements of four or more voices, most sounds are made by voices, and prominent bass lines mainly created by voice. 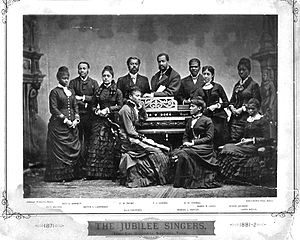 The Jubilee genre was popular in the early to mid 20th century; while white people were living lavish lifestyles, they were surrounded by Black citizens being lynched but still managed to create new and uplifting music in the midst of their terror.  A mass migration of Black citizens that began around 1910 helped to give the genre some exposure along with the use of radio to help popularize the genre in addition to the competitions held in the streets during the 1930s. Various important artists of the genre include Norfolk Jubilee, Fisk Jubilee Singers, Golden Gate Quartet, and The Mills Brothers. In addition to its social influences, the Jubilee genre went on to influence the rise of Gospel, and other prominent genres of today.