Jubilee Quartets were a popular African-American religious musical group in the first half of the 20thcentury. The name is derived from the Fisk Jubilee Singers, a group of singers organized George L. White at Fisk University in 1871 to sing Negro spirituals. These groups created a unique style of music using a cappella ensemble of four to six voices that performs formal measures of spirituals in close four-part harmony. The group consisted of a bass, tenor, soprano and alto singers.

The jubilee quartets were comprised of male singers who had no prior training in western classical music. They performed for church services, community functions, festivals and road shows. This genre navigated through three different monumental time periods; The Jubilee quartet period (1880-1929), The Transitional Period (1930-1945), and finally ,The Gospel Period 1946-1969). The Quartets would dress very professionally during those performances and became popular when they gained recognition through radio and touring in the 1940’s.

Good Ole Ragtime arises on the scene towards the end of the 19thcentury, 1893 to 1917. Unbeknownst to most, Ragtime is actually a contraction of “ragged time,” referring to its rhythmically broken up melodies. Ragtime began its roots in African American communities through the southern parts of the Midwest, particularly St. Louis. It was influenced by early jazz and classical music, including not only African American characteristics but European American as well.  Ragtime was played by African American musicians in bars and club and became widely known across the US once sheet music for pianos were introduced.

Ragtime was influenced by cakewalking, a dance performed by slaves that mimics white upper-class decorum. The slave who outperformed the rest was granted a prize of a piece of cake. Another injustice were Coon songs, which were typically performed by whites who painted their faces black trying to represent stereotypes, the whites who believed demonstrated the African American culture.

Jubilee Quartets were successful. The platform they created for themselves from traveling and touring gave them publicity and produced funding for their personal lives. The Quartets music  encouraged African Americans to make that transition from being viewed as a slave to an entertainer. This period pronounced the beginning of African American receiving monetary compensation for their wondrous efforts. 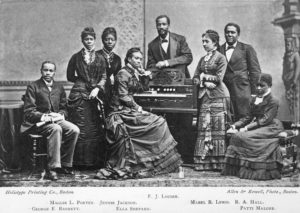 Jubilee perfectly matched rhythm with spiritual styles influenced later genres, birthing gospel. Jubilee also had an impact to the ragtime genre. Together, both ragtime and jubilee provided vital foundation for the creation of jazz,blue, rock and roll, and R&B. Ragtime was so influential in the popularization of jazz that the genres were often synonymous in the public arena.

Ragtime and Jubilee made such huge impacts on the music we now have today. In my opinion, I feel Ragtime and Jubilee was music of expression whether positive or negative. It was an outlet to display those emotions. I appreciate this genre for allowing African Americans to be shine bright and be seen.