Jazz is a music genre that originated in the African-American communities of New Orleans. Jazz is related to jasm meaning “pep, energy”. During the 18th century, slaves would gather in an area called Congo Square, which was famous for African dances. It is developed from ragtime and blues. Jazz has rooted from African cultural and musical expression, and in other African-American music traditions.

Jazz has many sub-genres, but is characterized by swing and blue notes, call and response vocals, and improvisation. Improvisation is one of the key elements. It is attributed to the influence of earlier forms of music like blues, which arose from field hollers and work songs on plantations. Jazz is often described by the interaction and collaboration, not focusing on composer, and the performer. Syncopation is a technique that is used placing accents or ore expressing in different parts of a song. This is a big part of the feeling some good to swing; make you want to dance. During this era, arrangements were usually memorized or learned by ear. In many forms of jazz, instruments include piano, guitar, double bass, and drums.

Jazz played a big role in bringing black people together, and other races as well. But, jazz really hit its glowing point during the Harlem Renaissance era. This was the burst of African-American cultural activity. The Harlem Renaissance began in the 1920s and lasted until the 1930s. It symbolizes the rebirth of hope for African Americans. Harlem was the home to writers, musicians, singers, painters, and scholars. Jazz was a form of music that combined blues, and African rhythms to produce a unique sound. During this time, African Americans moved from the south to the north, and jazz was a music form that helped many people and brought African Americans together to produce something that is still important today. 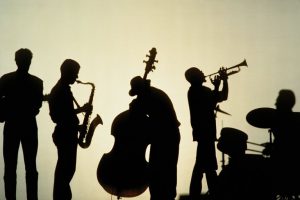 Louis Armstrong was one of the world’s great jazz musicians. Armstrong played the trumpet. He spread this new form of music to other parts of the world. Other jazz legends that followed Armstrong are: Duke Ellington, John Coltrane, Miles Davis, Charles Mingus, Thelonious Monk, Dizzy Gillespie, Charlie Parker, and more.

Jazz is a form of music that can be compared to other genres, but has a unique and distinct sound that can’t be compared to any other. Jazz is a genre that can be successful based on improvisation. There are many jazz legends that helped pave the way for this genre to still be important today, and to the point of there being other forms of jazz( hard-jazz, cool-jazz, funk-jazz, etc). Jazz is a form of music that doesn’t need lyrics, the musicians playing speaks for the song. Jazz music affects you in, and can calm you during any form of emotion state.

Jazz influencing its own genre, it has made an impact on afro-latina-jazz, afrobeat, smooth jazz, punk jazz, and others forms.

I enjoy jazz music very much. I would say it is one of my top music genres to listen to. I like jazz for the difference, the feelings you can get from listening to it. Jazz can heal, and calm you through anything you are going through. It makes me feel nostalgia. One of my favorite artist is John Coltrane. Hi music posses happiness, sadness, struggle, and etc. Even through him working with Miles Davis, and later on having is own quartet, there was growth, and his music spoke to others.