Jazz was created in the United States in New Orleans, near the Mississippi River, which played a key role in the development of the genre. The new sound originated early in the 20th century, but the time period between 1930 and 1940 was an essential piece to the evolution of the genre. It’s place of origin was more diverse than any other part of the south at the time and allowed the jazz scene to flourish.

Sarah Vaughan – One of the greatest jazz singers that set the tone of the genre. Sang with a controlled tone and rich vibrato which inspired decades of singers. Originally, Vaughan was hired by Earl Hines for his big band as a second pianist and singer in 1943 and released a recording under her own name the following year. 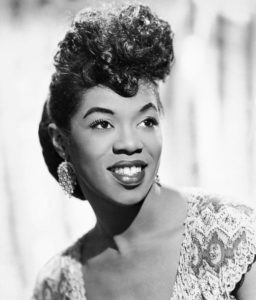 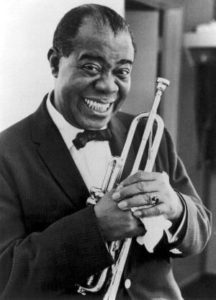 Louis Armstong – Started his career as a bandleader and later on became a soloist. Improvisation, a key element of jazz music, was made a focal point for soloists and became an essential part of jazz performances. Armstrong’s impact transcends jazz; his energetic, swinging, and rhythmic performances influenced the future  generations of artist’s performances to come regardless of genre

Trad Jazz – One of the earliest forms of Jazz that predates and entails Ragtime, Dixieland, Stride Piano, Boogie Woogie, and Swing.

Bebop – Created as an offshoot of and reaction to Big band and Swing. Bebop had greater rhythmic fluidity due to its emphasis on the more subtle hi-hat and ride cymbal. Bebop created a new sub-genre of jazz distinguished by extended solos and a richer and denser harmonic language.

Swing Band (Big Band) – Music style that usually includes jazz bands of 10 or more musicians. Golden age was during the 1930s but the sub-genre had originated in the 1920s. Fletcher Henderson was a pioneer in establishing big band music with his impressive ensembles of poised saxophonist and clarinetist.

New York City – The home of the golden age of Jazz music; later on became the “Capital of Jazz Music” . After prohibition ended in 33′ jazz clubs became a very popular scene in NY and propelled in popularity with musicians such as Louis Armstrong and Duke Ellington.

Kansas City – Kansas City was a hotspot for jazz and African American Musicians. A Kansas City native, Benny Moten, was a key figure for the spread of Jazz in the 1920’s Kansas City. One of the most significant contributions of the Kansas City jazz musicians was the advancements of Big Bands in jazz in the 1930’s.