Improvisation! Jazz music was an era of class and sophistication. Improvisation is a musical concept that essentially means on the fly, many jazz performers would freestyle, or improvise, notes that were played or musical sequences. This genre consisted elements of blues in a more swing rhythm style, it was also very individualistic as well meaning that one could stand alone and perform or practice jazz.

Ella Fitzgerald was a notable artist in this genre during this time. She was a singer and used song to express her emotions and tell stories of her life. Etta James was also a jazz singer within the peak of this genre, while her song ” At Last” is often used in wedding ceremonies and in romantic settings today.

Jazz originated in the South in the earlier 20th century, and was widely popular in places such as New Orleans and Mississippi. However the evolution of jazz came along with artists such as Duke Ellington and Louis Armstrong, they created harmonious tones mixing elements of different genres with jazz such as ragtime and soul, and made it their own. 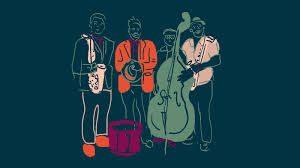