Ragtime originated in the Midwest African American communities in the late 1800s to the early 1900s. The name “ragtime” was coined from its previous term “ragged time”, signaling its percussive and syncopated rhythm of the music. Once ragtime became wildly popular, it made an impact on white communities. It started to be performed as a form of entertainment for white people. Dances such as the “cakewalk”, the “march and two-step” were some of the entertaining aspects of the ragtime genre. Thanks to its jazz-like and swinging beat and the usage of instruments such as the piano, banjo, and the fiddle, ragtime could be considered more of an instrumental music, than a set of songs. 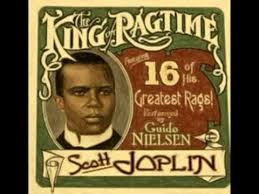