I was born with the music inside me. That's the only explanation I know.

“Ray” was born Ray Charles Robinson on September 23, 1930, in Albany, Georgia. His father (who was a mechanic) and his mother (who was a sharecropper) moved the family to Greenville, Florida when he was an infant. In his early years, Ray showed an interest in mechanical objects. His musical curiosity was sparked at Wylie Pitman’s Red Wing Cafe, at the age of three, when Pitman played “boogie woogie” on an old upright piano; he also taught Charles how to play the piano. One of the most traumatic events of his childhood was witnessing the drowning death of his younger brother.Ray started to lose his sight at the age of four or five, and was blind by the age of seven. Despite all of these trials,  Aretha Robinson (Rays mother) used her connections in the local community to find a school that would accept a blind African-American student. Charles ended up attending school at the Florida School for the Deaf and the Blind in St. Augustine from 1937 to 1945.

After signing with Swing Time Records, Ray recorded two R&B hits under the name Ray Charles: “Baby, Let Me Hold Your Hand” (1951), which reached number five, and “Kiss Me Baby” (1952), which reached number eight. The following year, and Ahmet Ertegün signed him to Atlantic Records. Charles reached the peak of his success at Atlantic with the release of “What’d I Say”, which combined gospel, jazz, blues and Latin music. Charles said he wrote it spontaneously while he was performing in clubs with his band. Despite some radio stations banning the song because of its sexually suggestive lyrics, the song became his first top ten pop record.

Ray Charles, who is a native of Georgia, recorded “Georgia On My Mind” and it went to be No. 1 on the Billboard magazine Hot 100. On March 7, 1979, as symbol of reconciliation in the aftermath of years of activism from the Civil Rights Movement, he performed the song before the Georgia General Assembly. After this performance, the Assembly adopted it as the state song on April 24. In 2003, Rolling Stone magazine named the Ray Charles version of “Georgia on My Mind” the 44th greatest song of all time. The link to the song can be found below. 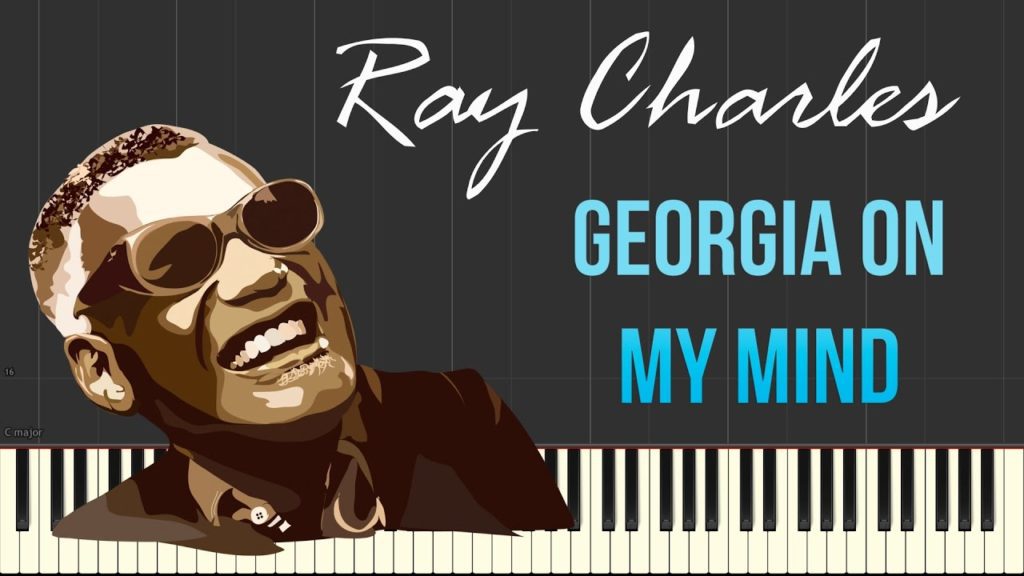 Ray’s style and success in the genres of rhythm and blues and jazz had an influence on a number of highly successful artists, including, as Jon Pareles has noted, Elvis Presley, Aretha Franklin, Stevie Wonder, Van Morrison, and Billy Joel.

**Ray Charles was one of the first musicians born in the state of Georgia to be inducted into the Georgia Music Hall of Fame for his version of “Georgia on My Mind” which was later made the official state song of Georgia.

**In 1981 Ray was given a star on the Hollywood Walk Of Fame and was one of the first inductees to the Rock & Roll Hall of Fame at its inaugural ceremony, in 1986.

**In 1987, he was awarded the Grammy Lifetime Achievement Award.