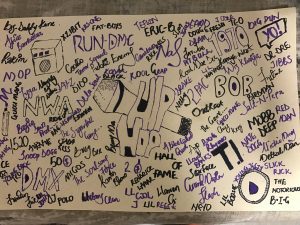 This poster describes the evolution of hip hop and some of its pioneers. It shows artist from the 1970s- till date(2018). Hiphop became very popular and started evolving in the 1970s, and the 1520 avenue represents the acclaimed birthplace of hiphop.

Hiphop started off as barbecue and block party entertainment in some of New York’s poorest cities. Today, it has become a global phenomenon that dominates the radio and has created an industry that generates hundreds of millions of dollars a year and has changed music culture in America, and the world.

To most people, Hip Hop is synonymous with rapping,but Hip hop is considered the overall embodiment of the entire subculture, which includes many key elements such as rapping, table turning, break dancing, graffiti art, and beatboxing.