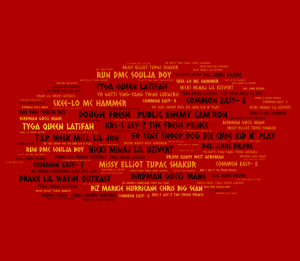 Most people think of Hip Hop as a synonym to Rapping, the art of rhythmically delivering vocals that are usually paired with an instrumental; ButHip-Hop today is not just a musical genre, but also a global culture that has changed music, dance, fashion, language, and even politics! Hip hop became global for the first time in 1979, when The Sugar Hill Gang released Rapper’s Paradise.

Like Rapper’s Paradise most songs released in the infant stages of Hip Hop had a positive and fun message. In the 1980’s Hip Hop began its evolution. Raps began improving when MCs started to use more complex rhymes and developing diverse musical flow. Beat techniques started their improvement through scratching and short drum breaks. In 1982 Furious Five and Grandmaster Flash released The Message, an early example of socially/politically-conscious hip hop.

Instrumentals were being created in studio settings by now, and the introduction of drum machines, synthesizers, and samples from old funk and disco records became a prevalent norm within the genre. Hooks, a catchy line of lyrics that are usually repeated within a song, also became popular.

The 1990’s brought Gangster rap to the world with artists like 2Pac, Notorious B.I.G, Jay-Z, and Puff Daddy.This 90’s Hip Hop consisted of raps about crimes, dangers of drugs, and injustice and police violence in the impoverished neighborhoods from which these rappers lived. In 1991 G-funk came in fruition. This style of Hip Hop used electronic effects, relaxed beats with funky bass lines, and female backup singers.This alternative hip hop came about by using audio editing software.

In the 21stCentury Hip-Hop, as music and a culture is loved around the world. Many popular Pop songs contain segments of Hip Hop in them Artists like Drake, Kanye West, and Lil Wayne have used many different styles in their songs such as jazz, classical, gospel, rock, soul, and R&B.

Hip-Hop has become so universal it can literally be fused with nearly any genre and be accepted into popular culture. This is also true for Hip Hop as a culture.  Hints of hip- hop art and dance ideas are consciously or unconsciously incorporated into today’s society. Its language is incorporated into the music and its fashion ideas are present throughout the highest of fashion. Something that Black people created is so celebrated with little acknowledgment to its authors, but nothing can take away from the timelessness which is Hip-Hop.

PrevPreviousThe Soul of America
NextGospel in the 50sNext