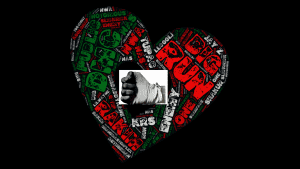 This is the poster I created to symbolize hip-hop as a civilization, genre, and a movement. I researched who some of the arguably most influential and popular hip-hop artists of all time are and created a word cloud in the shape of a heart with a hole in the center with red, green and white, rustic font. I chose these colors because they are often closely associated with the African American community by way of their association with Kwanza, the Black power movement, and many other stereotypically “Black” things. Hip-hop began as a genre in 1973 in Bronx, New York by DJ Cool Hirk from Kingston, Jamaica. An abridged version of the DJ’s influence was in noticing that at parties, people would wait to start dancing until there was a break in the songs. In Jamaica, it is common that DJs speak over the tracks they play by shouting themselves out or making announcements. He wanted to extend the “break” to encourage more dancing by incorporating the trend of talking over tracks for an extended period of time which gave way to the “MC”. This is one take on the birth/evolution of hip-hop, and there are countless more to explore. Hip-hop became so much more than a genre and broadened to become an entire culture that influences nearly every aspect of popular culture and society, whether one acknowledges it or not. Groups like N.W.A. used hip-hop and rap to spread messages talking about issues impacting the Black community and to stand up for their rights, and although this does still occur, hip-hop has taken a turn from its origin to also include senseless rap and over-sexualized lyrics and music videos. I included a bandaged hand in the center of the heart to depict just this. At its core hip-hop was for the people, but now, is hurt by the same people that it stood for. Some of the artists claiming hip-hop now have lost the sense of purpose in being for the “civilization” and culture of people and solely focus on the capital. They profit off of the audience and give them nothing in return, but poor role-modelship.