Hard Bop Jazz, which was most dominant from the 1950s-1960s, is a sub-genre of Bebop Jazz. Bebop Jazz is characterized by fast tempos, complex chord progressions, and rapid chord changes. Journalists began using the term “Hard Bop” in the mid 1950s to describe a new wave within Jazz that incorporated influences from Rhythm and Blues and Gospel. The genre rose in response to the development of Cool Jazz: Jazz musicians felt that the genre should return to its’ afro-centric origins rather than continue to develop classically. Hard Bop is extremely similar to Bebop but it uses simpler melodies that are easier to sing and slower tempos that are easier to dance to.

Hard Bop is characterized by its strong Blues and Gospel influence incorporating a Blues scale, dominant chords, blue notes and bent notes, repetition, call and response, and minor chords. Hard Bop is emotive and raw, using a heavy back beat (accents on the two and four). This genre is extremely lyrical and melodic while maintaining Bebop’s vertical based improvisation. Because of these factors, Bebop was the last genre of Jazz that people actually danced to.

There are several artists that are most popular for Hard Bop Jazz: Miles Davis Quintet, Charles Mingus, Art Blakey, Cannonball Adderley, John Coltrane, Horace Silver, and the list goes on. One of my personal favorites is Charlie Mingus for his rendition of “Moanin’.” Mingus is an African American Jazz double bassist, pianist, composer, and bandleader who is considered to be one of the greatest Jazz musicians of his time.

Another extremely important and influential Hard Bop group is the Miles Davis Quintet. They were an American Jazz band from 1955 to 1969 led by Miles Davis, who is remembered as one of the finest and most interesting Hard Bop groups of the 50s.

“‘Round Midnight” by Miles Davis Quintet

The social implications of Hard Bop Jazz were extremely widespread throughout the African American community. This genre developed as artistic expression by young black men to demonstrate their dissatisfaction and frustration with the social, political, and economic climate in the United States during that time: segregation, extreme racism, discrimination, lack of economic equality, etc. Hard Bop, in addition to Modal Jazz, reflected and contributed to the beginnings of the Civil Rights Movement. Finally, Hard Bop helped retain Jazz music’s afro-centric roots and did not allow it transform into mostly classical sounds.

Jazz is an extraordinarily influential genre not only in the United States but also around the world. As far as commodification is concerned, Caucasians had been adopting and stealing Jazz tunes since the Roaring 20s. As far as musical influence is concerned, Jazz, specifically Hard Bop, influenced two factions: Funky Jazz and Mainstream. Funky Jazz used relatively simple melodies, improvisations, chord progressions, and forms. Funky Jazz was all about the groove and feeling of the sound. Mainstream Jazz was far more complex using difficult melodies, improvisations, and chord progressions. Mainstream still focused on the groove and feeling, but incorporated the complexities of Bebop.

In conclusion, Hard Bob Jazz can be characterized as extremely complex, afro-centric, and groovy. This is my favorite style of Jazz because it incorporates the melodies and beats that I like in present day music. It is interesting to see how music created in the early 2000s is influenced by Hard Bop tunes. Also, I appreciate Hard Bop Jazz for being a genre that is more a bout music; it is also a form of social activism.

Thank you for reading,

I hope you enjoyed! 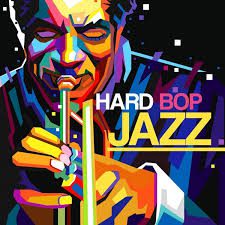 Hard Bop is a subgenre of jazz that is an extension of bebop music. The term began in the mid-1950s to describe a new current within jazz which incorporated influences from rhythm and blues, gospel music, and blues, especially in saxophone and piano playing.

During 1951-1958, Hard Bop was at the forefront of jazz and went through its most concentrated growth and development.

Also known for a brief time as Funk