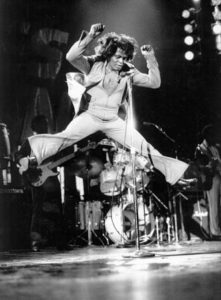 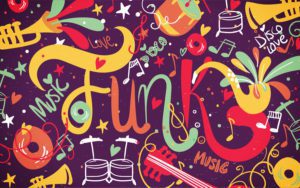 Funk is “attitude, pocket, memories, expression, pulse, LIFE.” (Funk A Documentary) Funk music as defined by Merriam-Webster is “music that combines elements of rhythm and blues and soul music and that is characterized by a percussive vocal style, static harmonies, and a strong bass line with heavy downbeats”. The one word that is constantly seen with funk is the “groove” and the “syncopated bass, drumbeats and a host of instruments” all work together to create the groove. (Britannica) Funk has rhythmic roots in sub-Saharan African traditions and in 1940’s New Orleans due to the fact both styles of music stay true to the “two celled  onbeat/offbeat structure.” (Music BMK) What became known as the “Funk Beat” was started by James Brown and his band who notably, in the late 1960’s, diverted from traditional R&B by putting “emphasis on the first note of the musical measure” rather than on the “second and fourth” beats. (Britannica) Songs like “Papa’s Got a Brand New Bag” launched this sound for Brown, however the concept of funk was no stranger to African American music as Jazz musicians often called their bands to put a little “stank” or “funk” on their music. By the 1970’s many other predominantly soul artists adopted the “funk” style such as The Temptations, Ohio Players, Kool and the Gang, Stevie Wonder and Sly and the Family Stone. There are many key elements to funk. Funk is usually played in large ensembles like Earth, Wind and Fire or in groups. The glue that held funk together was the bass line, and songs were often played to great lengths and until the groove was done leading to songs as long as nine or ten minutes. Funk, much like jazz, was also huge on improvisation allowing songs to consist of the same catchy phrase with rarely a formal chorus and there was generally no formal structure that has roots in Negro Spirituals. By the 1980’s some of the elements of funk had changed. Artists like Rick James and Prince emerged giving funk a raunchier and more explicit nature. Funk by the 80’s had also become very electronic. The 80’s saw the boom of the synthesizer, electric instruments, and drum machines. Large horn sections were done away with and instead artists used keyboards and the TR-808, programmable drum machine was widely used. The 80’s was the birth of electro funk. Another feature that was used during this time was the “talk box” which was used by Zapp and the talk box distorted the voice much like autotune of today. Many groups like Zapp, The Gap Band, and Cameo used these elements.

The idea of funk and funky music was widely popular as many mainstream artists made the transition to a funk style of music. In the 80’s many of the artists who were popular like the Gap Band were already formed and making music but huge success didn’t arrive until they adopted funk. Socially funk reflected the state of African Americans. The name funk means an unpleasant unsettling odor and in that sense funk music especially in its early days had lyrics that had social commentary and reflected the “Unsettling undeniable truths about life” especially during the time of James Brown.  (Britannica) However by the 80’s it is just as free and explicit as it wants to be. It is the most raw and that translates to performance. In the 80’s groups like the Gap Band and artists had truly extravagant live shows that have not been surpassed in today’s time. Live performance was huge during this time and many of the artists such as Rick James and Prince were number one artists in the country translating  to huge record sales and ultimately money. The influence of funk is wide reaching to rock and even Jazz artists like Herbie Hancock and Miles Davis leading to Jazz Fusion. The influence of Funk and especially 80’s funk is extremely present in the foundation of hip hop. DJ’s would take the “get down”, as Grandmaster Flash calls it, of Funk Songs and loop them to create something new. This was called sampling and was used in Hip Hop in the 80’s and 90’s. 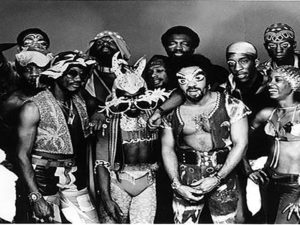 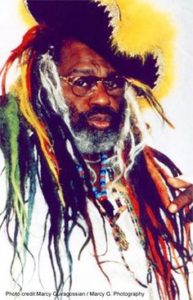 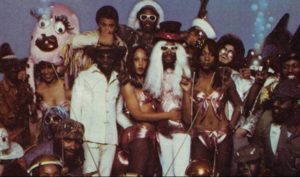 One of the greatest and most influential artists to come out of the funk genre is George Clinton. George Clinton was born on July 22, 1941 in Kannapolis, NC. Clinton was first a doo-wop singer a style of music made popular in the 1950’s. Doo-Wop is most associated with groups and a particular style of singing  that is a variation of of the Jubilee Quartet. Clinton performed first with the group The Parliaments who reached little too modest success with just two singles. However due to trouble with their label Clinton and the Parliaments “refused to record any music”. (George Clinton) While this seems like a downfall this transition allowed Clinton to create what we now know as the Parliament Funkadelic collective. Clinton left his previous label and gave his same band a new name in Funkadelic. Funkadelic saw success as they performed beginning in 1968. However in the 70’s George Clinton began working and performing under the both names Parliament and Funkadelic once he “gained the rights” to the Parliament name. (George Clinton) It is said that 1978-79 was the “most successful year” for the collective as they released a slew of hits from “One Nation Under a Groove”, to “Knee Deep”. Shortly after the success of the collective Clinton began to work on his own in the 1980’s and he found quick success in 1982 with the smash hit “Atomic Dog”. Clinton is very well known for his stage performance. Parliament/Funkadelic was well known for their use of the mothership, elaborate stage components, and elaborate stage costumes that left audiences with the chance to witness a once and a lifetime experience. With mostly number one singles and top 40 hits Clinton saw monetary success and even after that slowed down and legal troubles came stage shows and festivals made up for monetary loss and still continues to work to this day. George Clinton was one of the first to experiment with a “computer ish” style of funk using the synthesizers and 808’s that were popular and also leaned heavily on a psychedelic element. The style of Clinton was extremely outlandish and innovative changing the game for performance and style within African American music, done away with were three piece suits and matching outfits, it became a contest of who had the craziest attire the craizer the better. The work of George Clinton can also be cited as the blueprint G-Funk era of West Coast Music and even on the East Coast in the early 90’s. Producers like Dr. Dre took the music that they grew up on and took the ever so famous basslines from Clinton and other Funk artists as the basis for their songs. Clinton still performs today and his music continues to be used in samples and continues to get the party going.