Getting Funky with Zapp & Rogers 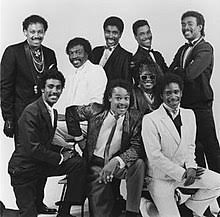 Zapp also known as Zapp & Roger was a funk band that emerged from Dayton, Ohio in 1977.  They trademarked what is known as the the talk-box effect. This allowed for artists to modify the instrument’s sound by changing the shape of the mouth, the instrument’s output into a microphone. They gained popularity after working with Catfish Collins and Bootsy Collins, who had both been involved with Parliament-Funkadelic in the early 1970s.

During this time, there was a constant battle between music publishing companies and artists. This allowed artists to become more aware of these different contracts. Artists were now profiting off of their music because of the ability to copyright.

Zapp and Roger has a heavy influence on future genres. The use of the distinct sound of talk box influenced rock artists such as Lenny Kravitz and hip hop artists such as 2pac.  Many artists have sampled their musics from Whitney Houston to Smokey Robinson. Even today their influence is still prevalent like in Bruno Mars’s hit, “Uptown Funk”. I am glad to know that I got a chance to listen to some of the songs made by Zapp and Roger and how their work is being incorporated into the music of the new generation.