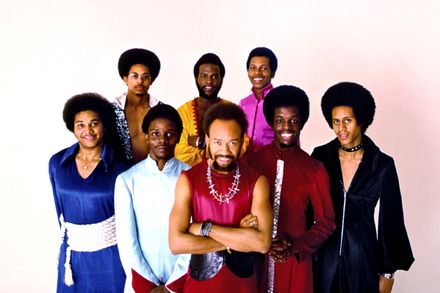 Funk music made its debut in the late 1960’s early 1970’s. Funk has a rhythmic style that is dance feel to it. It was developed from genres such as soul, jazz, and rhythm and blues. Funk was developed during the Black Power Movement. One of the major groups at the time were Earth, Wind & Fire. Earth, Wind & Fire came on the scene during the year of 1969 in Chicago, Illinois. The band started out with just three members who are the lead Maurice White, and his two friends Wade Flemons and Don Whitehead. The three men worked together writing songs and commercials. They eventually got a record deal and called their group “The Salty Peppers”. In 1970 the band became “Earth, Wind, & Fire” after Maurices zodiac sign and its elements. The rest of the band was also made when eight more members were added.  From 1970 to present day the band has had many members.

Funk music has a heavy/dynamic syncopated beat. It uses drums and gives a starring role to the electric bass which became very popular in funk music. The groove of the base line is what makes you want to get up and dance. Funk also has extended vamps that can be played over and over until the band wants to move on. Other instruments that are used are horns such as the saxophone and trumpet. They are used for emphasis. Funk lyrics also focused on social and political issues. A lot of funk groups had similar styles with outrageous costumes with flair, feathers, bright colors, and platform shoes.

At the time when Funk music had just become popular the Black Power Movement was happening. The black power movement was a political and social movement that emphasized racial pride, economic empowerment, and  equality for all African Americans. Eath, Wind & Fire played music that encouraged you to keep your head up when it really mattered the most. One of their most political songs is “System of Survival.” Funk music also had an influence on genres such as R&B and Neo-soul, Pop, and Hip-Hop.

Funk music was a musical era where African Americans were free to be themselves. Earth, Wind, & Fire was apart of the reason why black people at the time were able to just be carefree. There music style was like by a wide range of people and the allowed blacks to embrace their culture. They also made it easy to address political and social issues that were taking place at the time. I personally love funk music and all the characteristics that comes with it. The beat that makes you want to get up and dance and the lyrics. I could listen to funk music all day.  The facet that jazz, soul, and r&b are used really makes it an outstanding music genre. Earth, Wind & Fire is one of the most influential funk bands to this day.