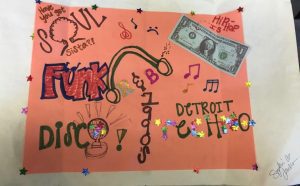 Rhythm & Blues is a style of music developed by African Americans that combines blues and jazz, characterized by a strong backbeat and repeated variations on syncopated instrumental phrases. the name’s origin was created for use as a musical marketing term by Billboard magazine. Chuck Berry, Ray Charles, and B.B. King are a few master of Rythmn and Blues music just to name a few. In classic R&B, there is a straight up stacking of vocal harmonies. The “rhythm” part comes from the music’s typical dependence on four-beat measures or bars and the liberal use of a backbeat, in which the second and fourth beats are accented in each measure. The “blues” portion comes from the lyrics and melodies of the songs, which were often sad, or ‘blue’, especially during the music’s emergence in the World War II era. The next genre that emerged after the World War II era was Funk!. Originating from variations of jazz, soul, and rock&roll, funk music emerged in the late 1960s as an incredibly unique, powerful form of black expression. The development of the terms funk and funky evolved through the vernacular of jazz improvisation in the 1950s as a reference to a performance style that was a passionate reflection of the black experience. James Brown’s band established the “funk beat” and modern street funk in the late 1960s. Funk performance has a large focus on improvisation, Improvised solos from each member of the band to “get funky”. The funk sound is driven by a groovy baseline, vamping, syncopated rhythms,variation, and shameless expressionism. This expressionism merged right into the next genre of music, Soul. Soul music developed in the USA in the late 1950s. Soul music is a return to black music’s roots—gospel and blues. The style is marked by searing vocal intensity and use of church-like call-and-response. Aretha Franklin, was considered the “Queen of Soul”, with her emotional vocal delivery ranging from forceful and high energy to sad, reflective and passionate. Soul music contains a driving rhythm with drums and percussion giving a steady backbeat on beats 2 and 4, and rhythmic, riff-based bass lines. Vocal music also had strong use of vocal and instrumental hooks. The next genre to emerge in the the 1970’s was Disco music. The music first made its appearance in New York in the famous club Studio 54. Disco music combined the groove based drum rhythms, energetic guitar parts of funk, and the orchestral arrangements of soul music. Disco became prominent part in America’s urban nightlife scene, where it originated in house parties, reaching its peak popularity between the mid-1970s to and early 1980s. With its 4/4 time signature and fast tempo, disco music was characterized by a”four on the floor” rhythmic style. This is when the bass drum plays on the “on”  beats and the hi-hat cymbal plays on the “off” beats. A reverb or echo effect was often applied to the vocal tracks in Disco songs. Most Disco songs followed the traditional pop verse and chorus structure. A commonly known Disco groove can be heard from  the tune ”Upside Down” by Diana Ross. Donna Summers and Gloria Gaynor can also be heard among the Disco Greats! Disco was sure to boost the energy of any house party. Directly born after Disco music cam Techno. Techno music is electric dance music born underground, Detroit, Michigan. In the early eighties a trio of pioneers in Detroit began merging the sounds of synthpop and Italo-disco with funk. Juan Atkins, Derrick May, and Kevin Saunderson were the young pioneers. Techno was notably more serious, based around a dark futuristic vision of the world by early techno pioneers in comparison to its Disco Predecessor. Often techno purists will criticize house for being more commercial and accessible.The distinction between these two genres seems to ultimately come down to a certain feeling that each one evokes. In the late eighties and early nineties,  The Techno and house music that remained classified as “underground” in the United States became a huge phenomenon in Europe! Around 1990 raves began to appear. Techno is a soundtrack for the wired world and reminds us that humans control the machines, and electronics can be used to express disco, funk and soul. After Underground Techno, Underground Hiphop reared it’s head, and is still a source of nature today. Most people think of Hip Hop as a synonym to Rapping, the art of rhythmically delivering vocals that are usually paired with an instrumental; ButHip-HopÂ today is not just a musical genre, but also a global culture that has changed music, dance, fashion, language, and even politics! Hip hop became global for the first time in 1979, when The Sugar Hill Gang released Rapper’s Paradise. In the 1980’s Hip Hop began its evolution. Raps began improving when MCs started to use more complex rhymes and developing diverse musical flow. Beat techniques started their improvement through scratching and short drum breaks.Instrumentals were being created in studio settings by now, and the introduction of drum machines, synthesizers, and samples from old funk and disco records became a prevalent norm within the genre. Hooks, a catchy line of lyrics that are usually repeated within a song, also became popular. There was different types of HipHop genres such as Gangsta Rap and Pop Rap. But most of all Hip Hop was universal. Hip Hop was a culture. Hints of hip- hop art and dance ideas are consciously or unconsciously incorporated into today’s society. Its language is incorporated into the music and its fashion ideas are present throughout the highest of fashion. Something that Black people created is so celebrated with little acknowledgment to its authors, but nothing can take away from the timelessness which is Hip-Hop. Each of these genres helped to evoke a different feeling or atmosphere. Music can change a person from the inside. That’s why it’s so amazing, no matter what the genre!