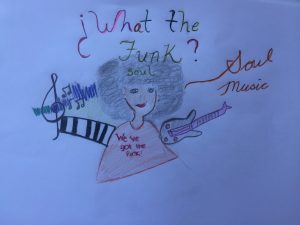 This picture captures Funk, R&B, House, Techno, Disco, and Soul. The title “What the Funk” and the caption on her shirt ( “We’ve Gort the Funk”  captures the funk music. The Afro hairstyle represents the funk and the soul culture, that most artists had. The musical instruments that are made to be the arms of the person are also significant. The piano represents the R&B music, and the guitar represents Funk music. Also, you can see the sound waves going into the treble, igniting R&B and Techno.