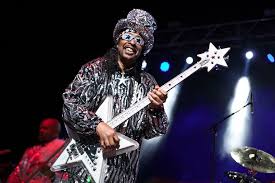 Music is something that is always evolving and changing due to different styles that have been introduced or are being introduced. Funk music began in the late 1960s, which ended up being a powerful movement for black expression. It evolved from soul and blues music but has been know to have melodic rhythms and groove that comes from the bass player. Funk is one of the styles that originated in the roots of African traditions. Funk was able to open up American to the world of African culture. The typical sound for funk is off-beats that are stressed at random times to create suspense for the listener. It creates a sense of curiosity for the next sound, which is always called syncopation. The funk performers used syncopated rhythms to create a sound that made it hard not to dance when listened to. The typical instruments you will find on a funk record would always be in some combination with the guitar, horns, strings, and the bass guitar. In the late 1960s and 70s, the funk sound was started to introduce a new sound.

James Brown is one of the legendary people in the funk world. He was an American songwriter, dancer, musician, singer, redcord producer, and a bandleader. He was born in 1933 and began his music career as a gospel singer in Toccoa, Georgia. In his whole musical career, Brown recorded 14 live ablums, had 144 singles, and 71 studio ablums. James was one of the most talent singers and businessman. He was more than just an artist. James Brown wanted to preserve the need to educate the next generations. His career lasted for six decades.

In the 1970s and 80s, a new funk star started taking the world for surprise. His name was “The King of Punk Funk”, or more commonly known as Rick James. He was born and raised in Buffalo, New York and was a multi-instrumentalist, record producer, and a singer-songwriter. Rick James began his musical career when he was a teenager. In 1966, James signed a record deal with Motown. He started releasing ablums but it wasn’t until 1981, where Rick released his most successful album, Street Songs.