The jubilee quartet genre had its start in the mid-1800s, as African American university a cappella groups emerged on the scene. Groups received the name of “jubilee quartets” because of the repetitive characteristic of the songs they performed. Groups would consist of four-six voices contributing to a four-part harmony, accompanied by either no instruments or a few. Some different types of quartets were university jubilee quartets such as the Fisk University Jubilee Quartets, community-based quartets, and minstrel jubilee quartets, where whites would perform songs using black face-reflecting the racial perception whites had of African-Americans. 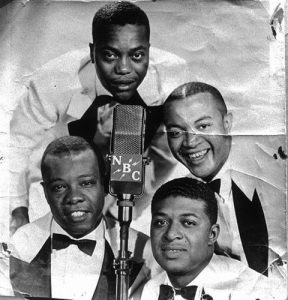 Some important performers in the jubilee quartet genre were the Fisk University Jubilee Quartet, the Dixie Jubilee Singers, and the Golden Gate Jubilee Quartet. Majority of the songs performed by these groups was a combination of three aspects of early music – call and response, harmonized ensembles, and the African American barbershop style of singing. These characteristics stemmed from negro spirituals and folk songs.

The rhythm that appeared in the jubilee quartet style was very significant and it would later set the platform for other genres to come.

Enjoy a video of the Dixie Jubilee Singers and see if you can hear some differences and similarities to the music we hear today!