Within the genre of Folk we decided to focus on the call-response style of music. Call-and-response is  “ A song structure or performance practice in which a singer or instrumentalist  makes a musical statement that is answered by soloist, instrumentalist, or group. The statement and answer sometimes overlap”. This structure of music is also referred to as antiphony.

The history behind folk music is synonymous with the struggle, empowerment, and perseverance of the African American community. The music has embodied the marginalization of the African people. Many europeans were uncomfortable with the informality of African Folk music as it had no rules or scales and was more of a free forming music form.

The structure of call-and-response derived from the plantation fields that often sounded like cries amongst African-American enslaved people. Often the call-and response song structure aimed to spread news or information.

Folk music was the only way for the slaves to express their pain and sorrows, that was uncontrolled by their white counterparts. Together, dance and song are a major part of the African-American culture, as they are used a symbolic way of staying liberated in our identity.

Today, folk music has given way to genres of music from blues to hip-hop music, each expressing the struggle and personal empowerment. 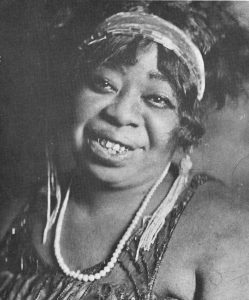 Ma Rainey was a famous new-era Folk artist in the Genre of Blues throughout the early 1900’s. She was considered “Mother of the Blues”.

Lastly, Alexa and I really enjoyed “patting juba” the clapping and dancing in addition to the foot stomping style comprised in the genre of Folk. This stylistic form created a culture for our music that became unique to enslaved Africans in the United States.