Folk music as a genre has a long standing history inside the United States. The songs within this genre were originally negro spirituals that were sung by slaves detailing their struggles or life situations. This provided a common comfort to all those who learned the lyrics and continue to comfort the ancestors of the slaves for years after freedom. Though folk music was mostly changed to fit into the white American society that overtook this genre, female black folk singers, like Odetta, helped bring it back to the black community by using methods that would show its use in conveying the relatable experience of the new black Americans, especially the new black women.

The most interesting method that has been shown through Odetta’s work is Empathic Imagination. Empathic Imagination is described as being aware of other emotions by seeing the situation from their perspective and using this idea to provide comfort to the person, similar to the original purpose of Folk music. This concept was also spread through many other art forms, such as paintings and poetry. As we learn about Odetta’s career with Folk , we can also see how she used this idea of empathic imagination to make her songs speak to the black audience, especially during the Civil Rights era.

Odetta’s songs often fell into the true characteristics of folk music, depicting the life of those in working class. She also had a hand in politics and was brought on to perform for many Civil Rights events. While performing for these events, Odetta also found her own ground in her internal politics on what it was like fighting for the rights of Black Americans from a female perspective. Many black women know the amount of pressure that is placed on them to not only be strong in the fight for racial justice, but also assimilate themselves to their white counterparts to allow themselves the accessibility to certain spaces. Odetta recognized that this was a problem within the community for most of the black women and even within herself. 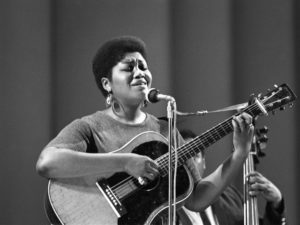 Odetta thought to break herself from the chains that she believed were on her due to the racial hardships her and people like her experienced. Taking those experiences and clinging to them, made her believe that every part of her was a product of the inequality she faced. Through accepting herself as she is and finding her love for her “blackness” through growing closer ties with African culture, she was able to translate this into her music. This made her music more adaptable to provide the solace she found in herself to other black women, which relates back to the idea of Empathic Imagination.  .

In conclusion, Odetta’s folk music’s  presence in the black community was instrumental to providing a useable example of the concept Empathetic Imagination. We can also see how she has influenced the return to the backbone of Folk as a genre in black lives and movements.

Griffith, Brian J. “Folk as the Sound of Self-Liberation: The Career and Performance Identity of Odetta.” Zapruder World, zapruderworld.org/journal/past-volumes/volume-4/folk-as-the-sound-of-self-liberation-the-career-and-performance-identity-of-odetta/.

Other Posts by Author: 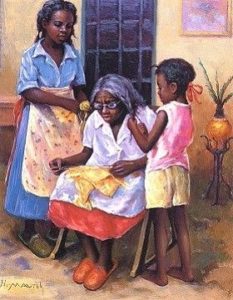 Empathic Imagination: The foundation of Folk Music By Zahriyah Denson       Folk music as a genre has a long standing history inside the