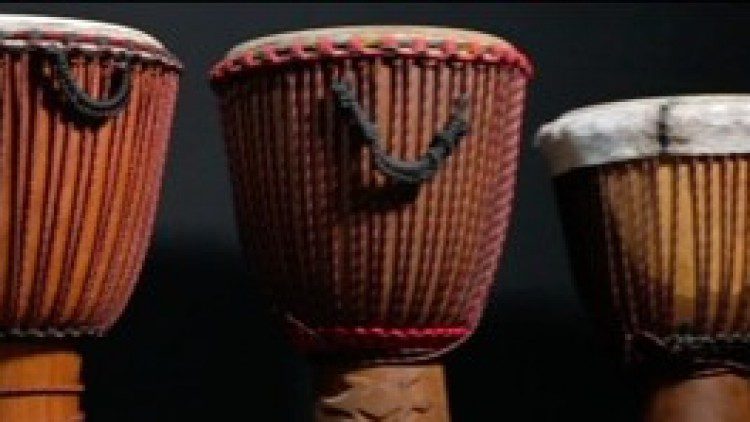 The djembe is a rope-tuned skin covered goblet drum played with hands, originally from West Africa. Traditional djembes are carved from a piece of hardwood and the drumhead covered by rawhide. Most highly valued ones are carved from the lenke tree and covered with goatskin. The name of the djembe comes from the saying “Anke djé, anke bé” which translates to “everyone gather together in peace” in the Bambara language and defines the drum’s purpose. Djembe players use three basic sounds: bass, tone, and slap, which have low, medium, and high pitch. These sounds are achieved by varying the striking technique and position.  The djembe has been an integral part of spiritual and ritualistic life in West Africa for many generations. It was traditionally only played by griots, well respected high-class musicians, who used it for storytelling. Mamady Keita is a master drummer  from the West African nation of Guinea. He specializes in the goblet-shaped hand drum called djembe. He is also the founder of the Tam Tam Mandingue school of drumming. By age 5 Mamady Keita had developed his own technique of tone, slap, bass and learned the rhythms of his village and was playing djembe in all of the ceremonies, celebrations and festivals. At the age of twelve, he became a member of the first regional federal ballet of Siguiri after Balanka Sidiki, a recruiter for the group, came to Balandugu looking for performers. He was appointed lead soloist of Ballet Djoliba in 1965 and, in 1979, became its artistic director. Since then, Keîta has worked as a performer with his group Sewa Kan and recorded a number of CDs.