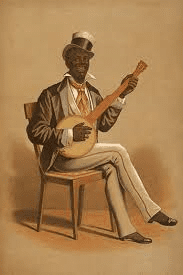 Folk music is one of the first and greatest genres of music black folks were exposed to. Folk is a combination of African elements and American elements created by slaves. The folk genre started in parts of Africa and when the slave trade took place it was brought to America.

Folk music originated when Africans were brought to America during the Slave Trade. Hymns, rhythms, and songs were used as coping mechanisms while enduring torturous labor. Folk music was also used as self expression, an outlet for their sorrows and frustration. Folk music is best known for its solemn theme, and sorrowful lyrics. “Slave music” was used to convey their struggles, and keep themselves connected to their cultural roots in Africa.

Some folk songs include: Sweet Honey in the rock, lord how come me here, soon ah will be done, Elijah Rock, and Eziekel saw the wheel. A famous Folk Music singer is Elizabeth Cotton.

Folk music often talked about reuniting with something either pertaining to God, or their homeland. Freedom is a major topic in folk Music because African Americans were still enslaved and faced brutal treatment. There is also a sense of pain and regret. The titles of Folk Songs are often depressing. Some folk songs include: Sweet Honey in the rock, lord how come me here, soon ah will be done, Elijah Rock, and Eziekel saw the wheel. A famous Folk Music singer is Elizabeth Cotton. She accompanied all of her songs with a guitar. Instruments used to compose folk music included the guitar, banjo, and the patting juba.

Folk music influenced future genres to come, such as blues, jazz, and R&B. These genres all remain African American dominated.

Black folk artist include Huddie Ledbetter known as “Lead Belly” as mentioned on the class website, along with Odetta and Nina Simone. Huddie Letter is most notable for his influence on Black folk music by integrating the genre with others like gospel and blues. Some examples of his work are “Goodnight, Irene” and “Midnight Special”. “Goodnight, Irene” was inspired by a complicated relationship Ledbetter had with his lover, named Irene. This is reflective through the blues feel of the song. Odetta’s style of folk music is most influenced by the Civil Rights Era. She used her music as a form of activism to spread a message centered around adopting nonviolent approaches toward demanding justice for African- americans. She is even often dubbed as the “voice of the civil rights movement”. Along with creating her own music she adapted well known songs like “This Little Light of Mine” and “I Know Where I’m Going”.

Ella Jenkins is a more contemporary folk artist. Uniquely, she took African American folk music as well as other folk music and adapted it for children. As a child, my mom would play her in the classroom. I grew up knowing songs like “Jambo,” “Yemayah,” and “The Hi-De-Ho Man.” Ella’s career has spanned over seventy years. At the age of ninety three, she is still performing and releasing music; last year, releasing her album Camp Songs with Ella Jenkins and Friends. Ms Jenkins continuation of folk music allowed children to grow up on folk music that had somewhat become far removed.

Overall, I enjoy knowing that Black folk music paved the way for many other genres of music. It is very interesting to me that folk music and negro spirituals go hand in hand. Folk music is not a genre of music black people typically don’t make ourselves familiar with, it makes me wonder how we became so far removed from it.