I continuously state throughout class how I don’t know much about music history. However, while reading That’s All Folks I actually learned about more than just the history of the folk genre. I deepened my knowledge of African Culture. That’s All Folks presented to me how slaves used songs to express their feelings and emotions because they were often shut down by brutality and injustice during that time period. Folk music was one of the ways that showed our people’s creativity.

Folk music was a way slave used to secretly communicate through hidden codes within songs and chants. A song that was featured in the article titled “Hoe Emma Hoe” discussed how they truly felt about their work, master, and circumstances. Personally, I feel so bad listening to songs like this because I feel that music can take you back in time. Folk songs during that time period allowed slaves to be more productive with their work which reminds me a lot of myself. I agree that music takes your mind off of work, so it allows you to work more efficiently. An observation I made is that slave masters allowed the slaves to sing because they worked faster when they did sing.

Throughout the article I also learned how folk music did not just stop during the 1900’s but it actually influences music today. One song that I actually enjoy listening to from the film Selma titled “Glory” by John Legend and Common is considered Folk Music. Folk Music is not distinguished by an instrument, beat, or artist. It is defined by pain and sorrow people go through. Folk music is a way people tell their story. 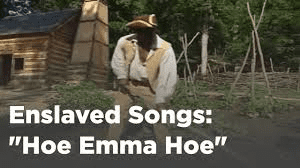