Origins and Characteristics of the Genre

Jubilee Quartets have a rich upbringing. Being a derivative of Negro Spirituals and Folk music, Quartet music got its initial start in the late 1800s. Negro Spirituals often told stories of hardships and trial and frequently featured themes of sorrow, but Jubilee Quartets brought a live, rejuvenated, mostly acapella sound to the table and became a fresh style of music.  An early Jubilee Quartet sound featured close knit four part harmonies, smooth yet formal arrangements and were primarily composed of men. Groups were structured in four featuring a lead (tenor), second tenor, baritone, and bass, regardless of the amount of members in the group. Quartets originally had an upkeep of a respectable image by adopting uniforms that a university glee club might wear which discouraged  improvisation.

Quartets did a phenomenal job of highlighting the Black community’s musical capabilities, whether people sang in situations like festivals and community functions, or whether people simply sang on street corners and battled it out to determine who had the potential to be the greatest group of all time. The Civil War end and the emergence of Jubilee Quartets coincided, Despite African Americans being a newly freed people, there were still several laws, policies, and societal standards that prevented them from being completely free and equal to their white counterparts. Freedom served as a catalyst for the subject matter of many quartet songs, and some of the same messages that were sung in years prior in a melancholy, longing fashion were “remixed” and sung in more upbeat ways.

Many well known Jubilee Quartet groups include the following, 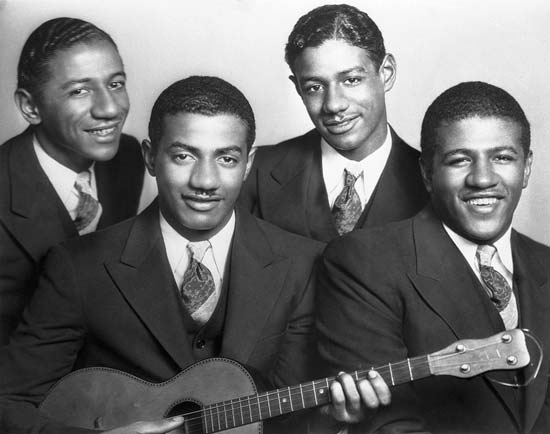 Radio stations and popular companies during the Jubilee period used the quartets as a mode of advertisement and engaged with the groups to push various products over the radio. Their sounds reached the masses and as far as sound waves would take them. Jubilee quartets would sing a song, commonly known as a jingle. and promoted a set company’s product or service. A vast number of people heard these ads and were compelled to purchase, so the radio ad market was very profitable. In the end, most of the profits made from these advertisements cycled back to the radio stations and companies. During the 1870s, White people initiated their own jubilee quartets. These are better known as “Minstrel quartets”. Barbershop style and Community Quartets also became popular amongst the white community. White minstrel performers often disrespected and imitated African American barbershop quartets. Records of White groups singing barbershop style became so popular that many people associated the sound with White quartets.

Jubilee Quartets had a remarkably heavy influence on the gospel world. If you sit in on a Baptist church service now, you’ll notice that harmonies are involved as well as percussive expression through the body. Like many quartet groups, you will also notice that many songs have a lead. Just like quartet music, gospel music features songs that help its listeners through life situations of any sort, not just troubled times. Gospel can morph into many different directions: it can be celebratory, it can tell a story, it can be about troubled time, and etc. They set the tone for many gospel groups that followed and will continue to have musical importance in the black community.

The Jubilee emergence was spawned out of the newfound freedom and artistic genius of the African American community. African Americans took the same words they sang while enslaved to reclaim a once sad narrative and convert it into one the hallmarked the greatness of the people. They celebrated the new life that was breathed into their communities, and took advantage of newfound artistic chances. Even though this art form faced racist and blatantly disrespectful responses from the white community through their blackface performances and using quartets as pawns as a means to attempt to reassert their dominance over the population, Quartet lived on. Generations to come will be able to look back and enjoy the smooth sound and harmonic blends of quartets and their sound will continue to live on.