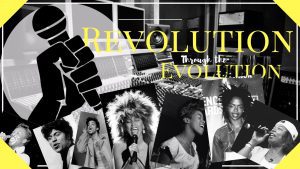 I created this poster in an attempt to caput the music of African American artists between the years 1960 to 1980s. I chose to use the image of a studio in the background because I wanted to have the background of the place in where music, change, and work was done by African American artists. I had the idea to first draw a Black power fist clutching a microphone and then had the idea to google search an image similar. The symbolism behind this picture is to capture the momentum of music during this time period as empowering work for the Black community. Whether it was a song like “I’m Black and I’m Proud” or any of Prince’s hit singles, during this time period, African Americans stood out in so many different ways. They spoke their truths, wore their natural hair, and were most of all unafraid to break the confines that society attempted to place on them. I titled the poster “Revolution through the Evolution” and included a sequence of African American hit artists starting in 1960 with Wilson Pickett to 1980 with Queen Latifah all-encompassing different genres and styles.