Hip-Hop originated in the United States, in the predominantly Black community that is known as the South Bronx. The genre emerged around the 1970s and has remained a popular music genre in today’s modern world. Hip-Hop music often consists of four elements; deejaying, rapping, graffiti, and B-Boy dancing.

A lot people fail to realize how important hip-hop has been in the development of Black culture. Hip-hop has given voice to the struggles of many African-Americans, struggles that otherwise would never be acknowledged by the public. There are many examples of hip-hop songs that shed light on the struggles of Black people. Some expressing the hardships of living in  an underserved, economically depressed community.

Popular influences on hip-hop have been soul music, funk, pop, and jazz. Along with that, hip-hop has many characteristics coming from their influencers. These include: heavy baseline over syncopated drums, catchy choruses, samples of funk, soul, and jazz, and synthesized beats and sounds.

Along with the idea that people fail to realize the importance that hip-hop has had on the development of Black culture, they also fail to realize how hip-hop has not only been commodified by white people, but also by black people themselves. Advertisers have also been able to take notice of the youthful appeal that hip-hop music has on all ages The popularity of “gangsta rap” pushed many hip-hop artists to begin portraying themselves as what they believed to be “gangsta”. Although times have changed, today, instead of talking about the hardships the Black community goes through, and even the phase of being a “gangsta”, rappers now express their feelings on getting money, having men/women, and being cheated on. The evolution of hip-hop has been one to watch over the years. 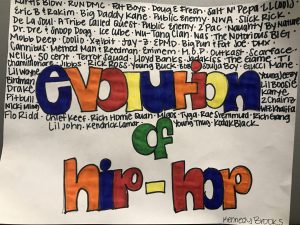 My picture represents what is the “Evolution of Hip-Hop.” The colors represent living in color, something I believe hip-hop always lives up to with their influences from funk, soul, and pop. I started the list of rappers’ names from the start to now, to not only allow people to notice how the names have changed, (names at the beginning were more original, while now they all start with “lil” and “young”) but also the blank space is left because I do believe that hip-hop will continue to evolve, and more names will need to go on that poster.

PrevPreviousThey Left Us Blue: The Commodification of Blues Music
NextAfrican American Music 1960-1990Next