Hip Hop emerged from influences of groups of people of African descent in New York City, in the early 1970s. This new form of music began a new aspect of black culture that is still evolving today. Hip Hop culture came out of the inner cities and appealed to all black people, including rapping/MC-ing, DJ-ing, breakdancing, block parties and graffiti. Hip Hop music is characterized by rhythmic beats, and sampling of beats or bass lines.

The old school hip hop era, characterized as the late 70’s to early 80’s, and as the first wave of Hip Hop. During this time, Hip Hop was mostly developing. New school Hip Hop emerged in the mid 1980’s from New York City, as artists began to make shorter songs to make their music playable on the radio, and more marketable. This period is when Hip Hop began to stake its claim as a mainstream genre. Golden age Hip Hop between the mid 80’s and mid 90’s is noted for it’s innovation and creativity. Artists who were popular during this period include Public Enemy, Eric B. & Rakim, and A Tribe Called Quest. ‘Gangsta’ rap is a sub genre of Hip Hop that reflects the violent lifestyle led by inner city youths. Its subject matter has been controversial, ranging from anti-police sentiments, to violence and brutality. T,he most popular group credited for having released the majority of ‘gangsta’ rap, is NWA.

Hip Hop continued to evolve into the 2000s, with different styles of rap emerging from different regions around the culture, like California, and the south. Artists popular today, credited with being some of the most influential of our time include Drake, Lil Wayne, Kanye West, and Jay-Z. Hip Hop is a genre that changes influences and styles periodically, but always appeals to our culture and will continue to progress and evolve for decades to come. 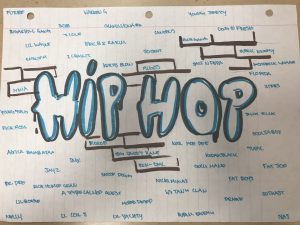 Graffiti has been a component of urban culture and the hip hop movement for years. This photo is my interpretation of graffiti on a brick wall, with artists of hip hop’s evolvement throughout the decades. The artists are supposed to represent bricks in the background of the graffiti.