In the documentary “40 years of Hip Hop”, KRS One begins by asking the question of what makes one a hip hop scholar.Typically, when people think of a scholar one thinks of someone who puts in many hours to study their craft. Based off that knowledge, I assumed a hip hop scholar was someone who listens and breathes music when in actuality it is way more than that.

KRS One made a point that certain subjects can be observed objectively but some things, such as hip hop, take cultural knowledge, which is something that is never objective or taught but rather given or destined within us. He  defined scholarship and how it was more than talent and skill. Scholarships focus on how you think and how you approach life and requires courage, time, and love. Hip hop is more than music or just another subject that is studied but rather it is something contained within us and in our culture. 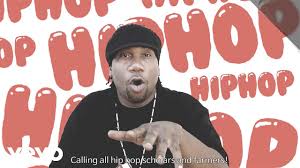 A hip hop scholar is one that feels hip hop all day everyday and rides for hip hop regardless if it is popular or not. Hip means awareness and hop meant movement. I never really thought about the literal meanings of the words hip and hop but it really opened up my eyes to the impact hip hop had in history and how it was used. KRS was saying that hip hop was a collective consciousness. One line that really stuck out to me was when he said for one to be able to see the truth they have to be true or the truth as well.

At first, I was expecting to learn more about hip hop in a musical sense but KRS brought up deeper concepts regarding hip hop in ways I have never considered. KRS One touched on the idea of how public schooling is just a system that teaches us how to respond reflexively to authority.

I never really connected the similarities between the influences of public schooling and hip hop. In public schools, people are always being taught the white history instead of the right history. KRS stated that Dutch knowledge does not match up with cultural and self knowledge because it is something that was forced upon us and made up by invaders that are trying to teach us how we should think rather than letting us think on our own.

In the early days around the 70s, people were getting beat and hurt for hip hop by people who were not from the culture. KRS One said that one problem with trying to learn culture is by trying to learn it from someone who stole or who is not part of the culture themselves.