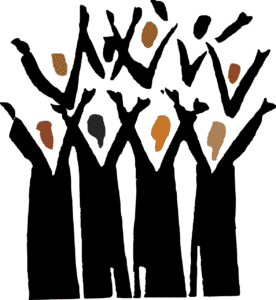 The era of gospel music began in the late 19th century where its musical roots can be found in spirituals and work songs. The enslaved people formed a tradition of creating songs that told stories about their work and living conditions. After the enslaved were emancipated, they had a strong desire to achieve greater economic and educational independence. Thus they moved to places like Chicago, St. Louis, and Philadelphia to pursue their dreams. As a result of this, their newly arranged music expressed their hope for their new lifestyle.

Composers such as Charles Tindley, Lucie Campbell and Dr. Isaac Watts were essential in gospel making the transition from spirituals and songs of the enslaved to revamped 20th century gospel songs.  They took the traditional songs and revised them lyrically and musically by applying African American music aesthetics like flatted notes, rhythmic pulses and pentatonic scales.Thomas A. Dorsey was another key figure in the development of gospel music. In fact, he is referred to today as the father of gospel music. Dorsey teamed up with Mahalia Jackson to take their new Christian sound to the street corners of Chicago to be heard. Aretha Franklin helped to introduce gospel style songs to the pop charts and because of the release of “O Happy Day” by Edwin Hawkins Singers, which is a mixed gender gospel chorus in San Francisco,  gospel music began to cross over into mainstream.