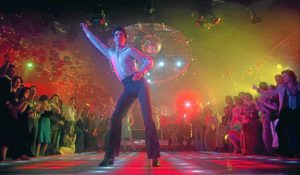 Disco music is a genre of dance music and cultural music that emerged in the 1970s from the United States during the urban era. The typical instruments that were used were the electric guitar, bass guitar, keyboard, synthesizer, drums, drum machine, percussion instrument, string section, and horn section. The unique disco sound is distinguished by the four on floor beats, basslines, string sections, horns, electric pianos, etc. Although singers typically have the spotlight with other genres, in this genre, record producers are more than likely on spot. Disco started as a mixture of music from venues popular within the minority community. Disco during this period is the dominance of rock music and dance music at the same time. During this time, several dance styles were also developed during this genre’s development. Many of the US cities had thriving disco clubs as this genre of music began to become more popular. Disco was the last popular music movement driven by the baby boom generation. It began to sell out by the 1980s. A key movement during this movement was the electronic dance music and house music. Famous Disco musicians consists of Donna Summer, Barry White, etc. Famous Disco songs consists of: “I feel love,” “Stayin’ Alive,” “I Will Surive,” etc.