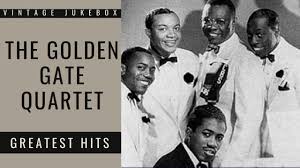 The Jubilee Quartet was influenced by Negro spirituals and was exactly that just in a more sophisticated way. The first Jubilee singers who performed at Fisk University as a way to raise funds for their financial struggles.  After this many Quartets across the U.S began to rise. Many Quartets would travel and perform with minstrel shows as a way to get money and also get an audience. Some popular quartet groups were The Dixie Humming Birds and The Five Blind Boys of Alabama.

This genre used as a call-response technique that consisted of four or more men and or women singing together. These groups would consist of a first and second tenor, baritone, and a bass and had a strophic melody. Early Quartet groups had close harmonies and featured styles that was strophic and included blues notes and hocket.

Jubilee Quartets began in churches so there was still no commodification. But as time progressed and more groups began to rise up, records were beginning to be made and sold. As time progressed they also began to appear on the radio and on tours. Jubilee quartet groups would perform on televison shows, and radio stations singing ads and jingles for different companies. They would also perform in minstrel shows as a way to gain income, but this depicted black people in a negative light. Besides minstrel shows, quartet groups also went on tours all over at places such as universities and churches.

The Jubilee Quartets represents the negro transition from spirituals to the entertainment world. Even though we still were in some ways being humiliated, blacks did what they had to, to survive.

All in all, the Jubilee Quartet was a major turning point for African Americans in the music world. It started the emergence of a performance world for blacks on many platforms and allowed the emergence of quartet groups to expand. These groups caught the attention of black and white audiences due to their unique four part harmony rhythmic style. The quartet music began to evolve into gospel which helped assist the evolution of secular music.