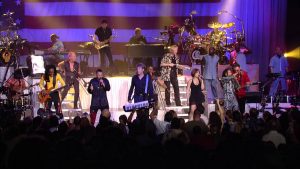 Chicago in the 1960’s was not a Fantasy for poor blacks or whites. They faced numerous problems such as poverty, unemployment, police violence, and lack of social services and education. What was once an issue for mainly Blacks turned to an issue for anyone that was poor. As blacks and whites joined forces to combat these issues through social activism, music also became a System of Survival used as a tool to spark Dialogue about The Way of the World. Two groups whose music gave individuals a chance to Getaway from their reality were the groups Earth Wind and Fire and Chicago. Their music inspired happiness, love, and challenged the social norms of the time.

Over 30 years after these groups formed, their similarities, differences, and greatness would be able to exist on the same stage at their 2004 concert at the Greek Theater. While Chicago is associated with Rock and Roll, and Earth Wind and Fire is known for their successful combination of R&B, Funk, and Soul. In the beginning of the concert both groups performed songs together. Through this the interconnectedness of Rock and Roll with genres like R&B, Funk, and Soul became apparent. Both groups were able to coexist while remaining true to their style of music. While there were similarities, there differences were seen too. One key difference being their performance style. Earth Wind and Fire opened their performance with upbeat music and a hype man to interact with the crowd. As he danced and moved around the stage trying to augment the excitement of the fans, it was immediately made known that their music was meant to give a party like feel when he said “ Are the party people in the house”. Throughout the concert they were dancing, harmonizing, and even added african drum sounds into their performance. All of their songs lyrics evoked all emotions such as sadness, happiness, and love. Chicago’s style of performance was also shown once they walked on stage. They were introduced by someone else and then immediately started playing. There performance was less interactive and they used the music as a way of speaking to the audience compared to Earth Wind and Fire’s use of music, lighting, and body motions. Their performance had less excitement and ome songs were instrumental.

Regardless of the groups different style, they both had a way of bringing together everyone in the crowd and making the fans similarities outshine their differences similar to how their music brought everyone together in the 19060s and 70’s. The audience connected with both groups and their songs. The energy in the room was happiness and the objective was to allow everyone to have a good time. While Rock and Roll is not known as a Black genre, Earth Wind and Fire has successfully been entered into the Rock and Roll hall of fame similar to Chicago because of the similarities of their music. This performance further confirmed the reason why both groups are known as the greatest of their time and how they are similar while existing in two different musical realms. They both created music that was meant to bring love After the Happiness was Gone. Songs that made people say “Let’s Groove”.