Before the period of slavery (1600s-1800s) Africans lived a cultural life in Africa.  In 1463, the Songhay established one of the three great medieval West African empires.  The Songhay’s cultural practices involved in singing, dancing, and epic poetry.  Singing, dancing, and praise songs performed by griots were central to the celebration of births, marriages, and holidays.  Griots were people who maintain the tradition of story telling, which transitioned into Negro Spirituals.  Slaves brought their cultural practices, which involved music, over with them to America. This type of singing was a type of call and response, which also partially inspired Negro Spirituals.

In Africa, people used drums, “shekeres,” “balafons,” etc. to add musical elements to them telling their stories.  Components of Negro Spirituals can be credited to African traditions, but spirituals are overall very specific to the exploitation of enslaved Africans in the United States and, of course, their descendants.

Enslaved Africans were sometimes encouraged to hold their own prayer meetings and during these meetings, the enslaved sang, chanted, danced, and even began “shouts,” which involved a “shuffling of feet and clapping of hands.”  Several aspects of traditions that sourced in Africa — and made their way into the rituals of enslaved persons — are common in today’s African American religious customs: “call and response,” speaking in tongues, “getting happy,” “being slain in the spirit,” etc.

Several aspects of traditions that sourced in Africa — and made their way into the rituals of enslaved persons —   are common in today’s African American religious customs: “call and response,” speaking in tongues, “getting happy,” “being slain in the spirit,” etc.  Negro Spirituals continue to exist in black churches and Gospel music today. The Turn of the Century 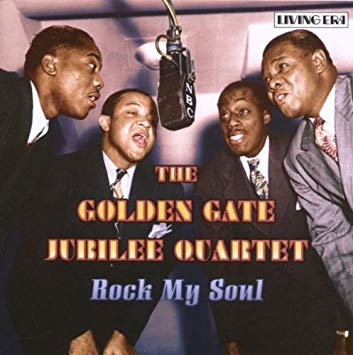 Jubilee quartets were originated in the mid-1800’s as an outgrowth of the “African American Singing Movement.”  Jubilee quartets are cappella vocal groups that consist of 4-6 members, mainly men, who “sung a four-part harmony arrangement a cappella style of with limited instruments.”  The Jubilee quartet genre had three different periods: Jubilee (1880-1929), Transitional (1930-1945), and Gospel (1946-1969).  There are many versions of jubilee quartets: university jubilee quartets, minstrel, community-based, Shape/Note Sacred Harp, and barbershop community quartets.

Politicians began to ask these musicians to help spread their campaign messages, as propaganda, to the African American community.  Also, Black musicians were given opportunities — during music videos, for example — that they would not have otherwise gotten.

Live radio broadcasting of jubilee quartet singing became popular in the 1920s. Some radio stations dedicated a few hours a day to “Black programming,” during which this genre was performed often.  Also on the radio, these groups would sing ads for different products and companies.

In music created by jubilee quartets, beats and rhythm were added to sacred texts, similar to those found in Negro Spirituals, and created what is considered today to be gospel music.  This genre also influenced the rhythm’n’blues genre.

Ragtime, which peaked in popularity between 1896 and 1920, emerged out of the Folk-Blues genre and from the ways enslaved people played fiddles and banjos.  During this time, Black Americans were only allowed to play their music at “venues of low reputation,” such as bars and brothels, which is where Ragtime was first created and recognized.

Ragtime is primarily instrumental and known for its elaborate syncopation (upbeat), which involves placing the beat in between where it would naturally go.  Black American musicians transferred rhythmic elements of music played on the banjo to the piano, which created ragtime.

Ragtime was used as entertainment for White people, which was evident in the performances.  Cakewalks were dance competitions between Black people who mimicked the behavior of White upper-class Americans; the winner would receive a cake, hence the name cakewalk.  Coon songs and minstrel shows portrayed negative stereotypical images of Black Americans and were most commonly performed by White people in blackface. Minstrel shows, however, were sometimes performed by Black people under the command of White people.

Ragtime was mainly an orally transmitted genre until White people took notice of it and wanted to sell its sheet music.  “Maple Leaf Rag,” composed by Scott Joplin, was the first piece of sheet music to sell 1 million copies; this inspired musicians and music publishers to produce sheet music for this genre.

Ragtime heavily influenced the jazz genre.  When rags were slowed down and horns were added to the music, that became the formation of jazz. Blues is a musical genre that originated in the south by African Americans at the end of the 19th century. It was heavily influenced by work songs and field hollers, spirituals, etc. Primary instruments that are used are the piano, guitar, harmonica, bass, and drums. Blues was a way of for performers to express themselves through song or tell a story whether it is good, bad, happy, or sad. Blues was very expressive and simple. Blues has a call and response style to it also.  It tells a “loose narrative” of African Americans. Blues music is made of twelve bars using four counts.

A lot of the first successful blues artist were women. In the 1920’s the first blues musical recordings were by women such as Mammie Smith, Bessie Smith, and Ma Rainey. The were stage singers with jazz bands. They had a classical musical style. They would do shows and make lots of money. W.C. Handy was  musician and composer. He was known as the “Father of Blues.” His song “Memphis Blues” was very popular and he sold his sheet music for $100.

Whites Americans started to take interest in Blues and sponsoring Blues  performers and tours. This allowed for Blues to become very popular . Because of how popular the genre had become it started to influence future genres such as Jazz, Rock & Roll, and R&B with its melodic feel and harmonies.