Don’t Snooze on the Blues

Blues has evolved tremendously throughout the history of Black music. Originating on plantations in the south, slaves and their descendants sang song while working the cotton fields. Being born out of negro spirituals, Blues took its own form in the 1890s. The story behind the name is pretty self-explanatory, the blues was what people sang when they were blue. Or in other words, when they were sad or down. Blues grew out of slave culture but, began evolving in the height of the Jim Crow era.  “Race records” was the term to describe Black music at the time due to the content of the music that our people were singing. Encompassing many feelings of sorrow due to slavery, heart break, racism or death (just to name a few), the blues created a healthy outlet for its artists to release their frustration about their current predicaments.

The blues was about releasing the emotions that were building up inside of the artist. Whether positive or negative, they normally consisted of one artist telling a story while other musicians play instruments in the background such as the harmonica, guitar, bass guitar, electric guitar and pianos. These instrument would come together to produce a sound like no other. A rhythm that would make you tap your foot and once the story behind the lyrics started to pour into the song, make you want to shed a tear as well.

Bessie Smith, born in April of 1894 in Chattanooga, Mississippi, was regarded as one of the greatest blues singers of her era. During the 1920s and 30s, she was dubbed the “The Empress of the Blues” for her soulful sound and great ability to capture her audience with her hearty voice. I thoroughly enjoyed Ms. Smith’s music due to the transparency she exhibited with her truth that she put into her songs. The passion in this woman’s music was undeniable and she made a significant contribution as a Black woman to the evolution of Blues in the early 20th century.

I was hoping to not only showcase Ms. Smith’s exemplary work but, to also to identify some of the commodification that was present within the genre. The film showcased in the video is of Bessie Smith’s only film appearance. She was able to showcase one of her songs but, most of the songs used on the soundtrack were composed by W.C Handy, a well-known African American composer. The short film consisted of an all-black cast, showcasing the work of many talented artists in many areas. Often, we have discussed the commodification of black music by white people in the business but, this film is a perfect example of how we made a great return on our investment into our art. This project and others provided great inspiration for black artists back then and continues to inspire great Black artists today. 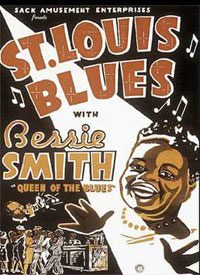