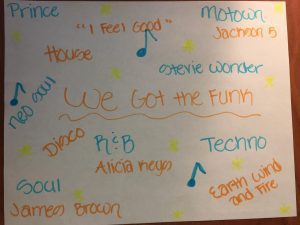 We got the funk, gotta have that funk! Funk music originated in the 1960s and 70s during the fight for equality, the Civil Rights Movement. Disco came into the scene in the 1970s and incorporated dance into its composition. The genre became most popular in the nightclubs and often involved a disco ball as an accessory. Soul first emerged in the 1950s and has many of the characteristics of the Gospel and Blues genres, as call and response was incorporated. R&B originated in the 1940s and is one of the most popular genres to this day. The songs of this genre include a variety of messages, from a breakups to the daily practices of the artist. Lastly, the creation of Techno music can be credited to Detroit. Known for its electronic sounds, Techno music was heavily influenced by jazz and funk. Each genre, although quite different, has had a unique influence on the music world and the African-American community.