The Origin Of Jazz

Starting in the south down in the bayous, from New Orleans emerged a new sound and genre that none had ever heard of, Jazz music. There are many different styles of jazz such as: bebop, swing, traditional, cool, and west coast. Most know jazz in two forms: upbeat jazz that makes people want to jazz and slow mellow jazz that makes people want to feel relaxed. Cool jazz however, became one of the biggest forms of jazz with Miles Davis as its creator.

The Creator of Cool Jazz

Miles Davis was born May 26, 1926 in Illinois and is known as the creator of cool jazz. Miles Davis’ choice of instrument was the trumpet. The way he played the trumpet was like no other and inspired many people and other forms of jazz music. Davis created cool jazz by forming a group of other jazz artists and mixing different instruments such as the trumpet, piano, french horn, etc. The group didn’t last long but their tracks influenced other artists and styles of jazz. 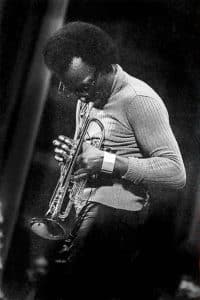 What is Cool Jazz?

Cool jazz itself came onto the music scene in the late 1940s and is usually referred to as the “white man’s jazz” because it was performed by and appealed more to the white man. Cool jazz is a calm and relaxed style of jazz. It is associated with soft tones, vibrations, and drums. Cool jazz also influenced other jazz styles such as swing and west coast jazz.

Jazz music originated down south in New Orleans, LA. There are many different genres of jazz music such as bebop, swing, traditional, and cool. Miles Davis is known to be the creator of cool jazz. He used his trumpet along with other musicians and instruments to produce a new sound of jazz: cool jazz. Cool jazz is known to be relaxing and calm and referred to as “white man’s jazz” because it appeals more to a white audience. It also influenced many other styles of jazz.